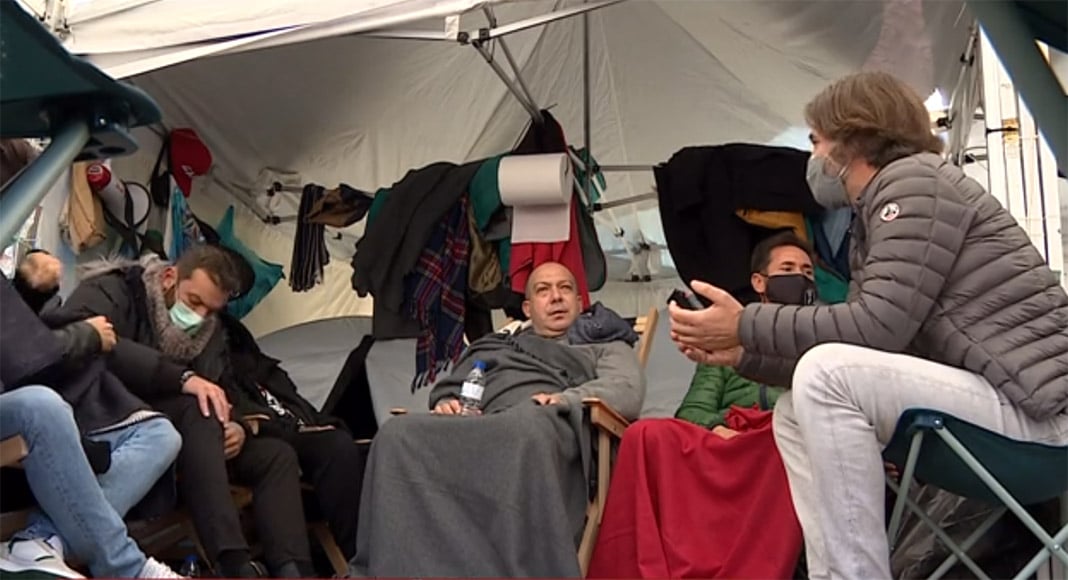 Now into their fifth gruelling day without food, the eight men and one woman on hunger strike outside parliament in Lisbon have received cold comfort from prime minister António Costa.

Walking into the Belém Cultural Centre for a video conference with president of the European parliament David Sassoli this morning, Mr Costa said: “If every person who is suffering – and right now there are many – resolved to stage a protest and demand to talk with the prime minister or President of the Republic, obviously this isn’t possible”… “right now is not the moment for tensions and radicalisms”.

The gist of the prime minister’s message was that many of the measures on protestors’ list of demands “already exist” while others are “purely and simply unacceptable”.

This latter reference was taken as referring to the request that financial help be extended to people whose tax/ Social Security situation is not ‘regularised’.

Mr Costa’s overall stance was that a huge amount of financial support is already in place, and dialogue remains ongoing – if not with the group representing the Pão e Água movement camped outside parliament.

How this will be greeted by the protestors is unclear. They are still there. They show no signs of backing down, and they have said if they don’t get their audience, they will be leaving ‘in ambulances’.

Yesterday, the protest was visited by Francisco Rodrigo dos Santos – leader of centre-right CDS – who said afterwards it was time for PS Socialists to show ‘humility, humanity and respect for the thousands of Portuguese who have found themselves at a dead end’ due to virus-led restrictions on their livelihoods.

Judging by the prime minister’s comments today, the chance of that is still some way off.

Comments over social media have been mixed. There are some who say hunger-strikes should be for a ‘higher cause’, not staged in such a ‘media-catching’ manner – while others see the government’s attitude as ‘deplorable’.

Said one of these writing last night: “Strength and courage to this group and to all they represent. Dialogue is the path of democracy. All those who flee from dialogue, flee equally from democracy”.