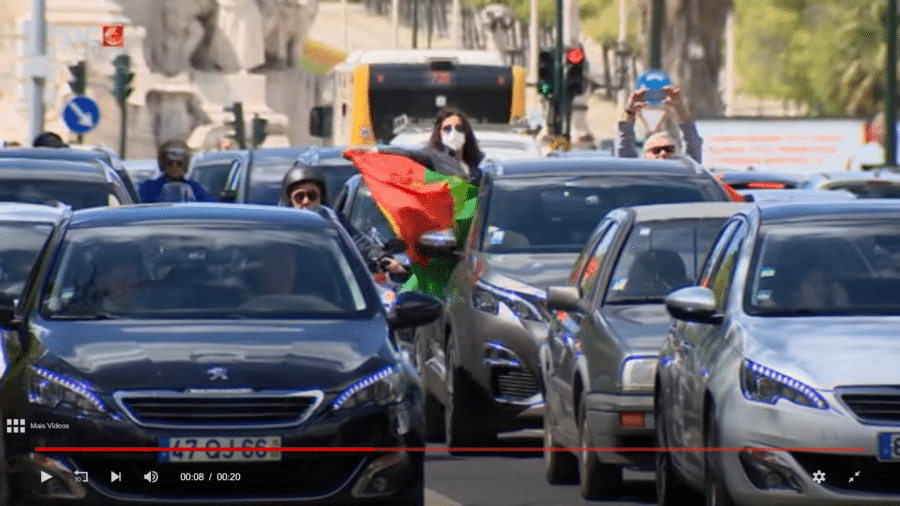 Hundreds of motorists honked their horns in ‘disgust’ in Lisbon and Viseu yesterday over the ‘pardoning’ by Judge Ivo Rosa of former prime minister José Sócrates for various crimes of corruption and fiscal fraud (click here).

A procession of cars wound its way noisily through the streets while a petition demanding the judge’s removal from the Portuguese magistrature was busily gathering signatures.

Over 170,000 people have currently put their names to the petition which shows little sign of ‘slowing down’ (click here).

The anger and to a large extent ‘stupefaction’ over Judge Rosa’s reasoning has filled newspapers since he read out his decision last Friday.

It has been slated by politicians from the left to the right; resulted in dozens of opinion articles with very little in the way of support given to any of the parties involved, even the Public Ministry whose ‘case for the prosecution’ seems to have fallen apart so spectacularly.

One aspect that cannot be ‘forgotten’ is the fact that however ‘cataclysmic’, this decision must be seen as provisional.

Commentator Luís Marques Mendes stresses Appeal Court judges will now be required to look at Judge Rosa’s reasoning, and if they rule against, overturning it, it certainly won’t be the first time. Judge Rosa has seen many of his decisions overturned on appeal.

Meantime, José Sócrates – apparently ‘jubilant’ and most definitely defiant – is scheduled to appear on national television on Wednesday evening (TVI). A social media campaign for a ‘national boycott’ is being widely shared, encouraging citizens to take to their terraces/ open windows during the interview and ‘beat saucepans, blow whistles’ and generally once again show the country’s ‘outrage’.

Tabloid Correio da Manhã this morning runs with the headline: “Guterres guarantees a place for Ivo Rosa at the United Nations”, claiming the UN secretary-general ‘invited the judge to renew his connection to the UN once he had decided on Operation Marquês’.

The whiff of institutional camaraderie is becoming so redolent that it is difficult to imagine this is going on in a country in Europe. But it is.

Said Fernando Figueiredo, the citizen of Viseu who thought of the idea of a ‘concerted honking’ and trailed it over social media to see so many respond: “It’s time for the government to pay attention to the combat of corruption, white collar crime, economic and financial crime, because this is what threatens our future year-after-year and doesn’t let us leave the state of social putrefaction in which we find ourselves”.