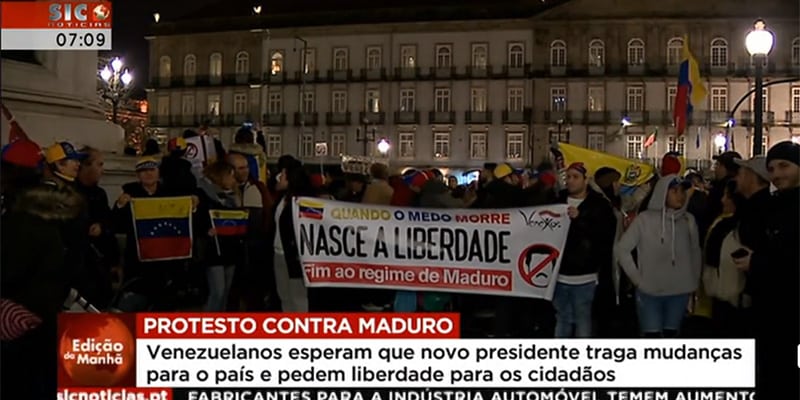 Hundreds of ‘luso-venezuelans’ (citizens with Portuguese roots who have fled Venezuela) joined demonstrations in Lisbon and Porto last night, calling on the Portuguese government to support the growing pressure on President Nicolás Maduro to accept his time is over and step down.

But as the throngs waved flags and banners and answered journalists questions, in Venezuela the dictator was holding his ground.

As so many reports suggest, things could get a whole lot worse before they get any better.

The demonstrations here mirrored protests being waged in countries all over the world.

From Mexico to Hong Kong, exiles have been taking to the streets in support of regime change, explain international reports.

The crisis has particularly shone a light on the sheer number of Venezuelans who have already fled the south American country.

In Porto, says SIC, there are around 7000 ‘refugees’ from the Maduro regime: ordinary people who managed to get out ‘in time’ and find a country where their children could be educated, and where there was food.

Said one of the demonstrators interviewed by SIC last night: “I won’t be returning. We are safe here”.

In Lisbon too, the calls from protestors out in the cold of Terreiro do Paço were in support of opposition leader Juan Guaidó who declared himself president yesterday and has the ‘support’ (if now only in word) of the United States, Canada, and a number of south American ‘neighbours’.

But Maduro still has his allies – not least Russia.

Mexico, Cuba, Turkey, Uruguay, they all appear still to be on the side of Maduro and against the US ‘meddling’ in Venezuela’s affairs.

Says the Guardian, “China has not yet publicly declared its support for Maduro but Venezuela has been one of Beijing’s closest allies in Latin America, and the largest recipient of Chinese financing, as much as £38bn in loans by 2017”.

Thus Portugal, for now, is choosing its words very carefully. Bypassing the calls last night to come out in support of Guaidó, foreign affairs minister Augusto Santos Silva said that the government of Portugal “hopes” that Nicolás Maduro “understands that his time is over”.

The ministry’s official Twitter page carried the text: “Portugal integrally supports the declaration by the High Representative (Federica Mogherini) in the name of the EU. We renew the appeal for there to be no violence and for the will of the Venezuelan people manifested today for the realisation of free and just elections to be respected”.

Meantime, the United Nations is appealing for dialogue.

Attending the world economic forum in Davos, secretary-general António Guterres – a former Socialist prime minister of Portugal – said: “We hope that dialogue will be possible to avoid escalation to a conflict that would be a disaster for the population of the country and for the region”.

Says SIC, “Guterres added that ‘all sovereign government have the possibility of choosing who they want’ when it comes to recognising which of the two men is the legitimate president”.