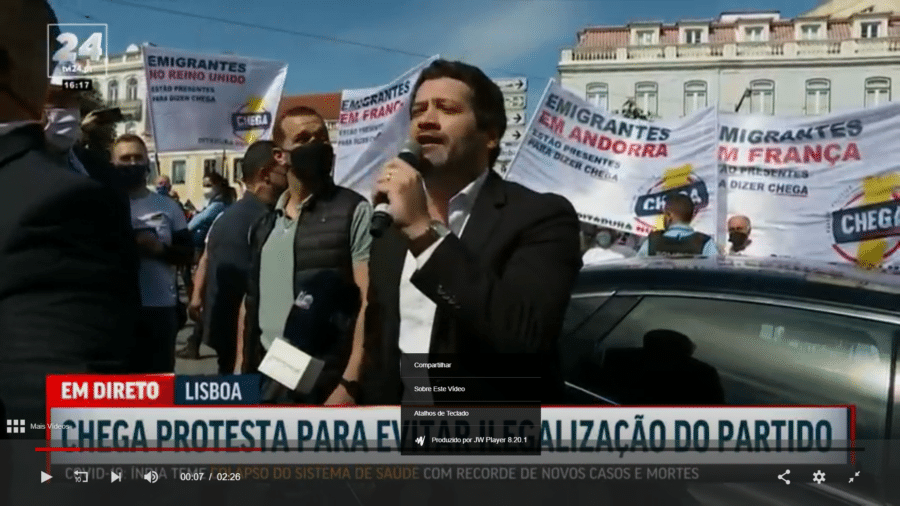 Hundreds of people took to the streets of Lisbon this afternoon to demonstrate against what has been described in the media as ‘the illegalisation of Chega’ – the right-wing party led by radical MP and defeated presidential candidate André Ventura.

Ventura led the procession which set off from Príncipe Real making its way past the Constitutional Court to Rossio, just over 2kms away.

The gist of the chants were that only the people can decide whether or not Chega is legal.

According to Observador, Ventura is seriously worried of the possibility of finding his party ‘declared illegal from one day to the next’.

Back in February former MEP and fellow ‘defeated presidential candidate’ Ana Gomes asked the Attorney General to ‘re-appreciate the legalisation of Chega’ – on the basis that in her opinion the party “violates the Constitution of the Republic” . She also asked for the origins of the party’s funding to be investigated.

Since then, according to Ventura, there have been other ‘anonymous sources’ who have also presented proposals to the Attorney General – to the extent that he is ‘concerned’ that “there could be a movement prepared with the objective of persuading the court or the Public Ministry (or both) that the only way to save democracy is to extinguish Chega”.

Clearly, Ventura believes ‘the only way to save democracy’ is actually to allow Chega to continue with its seemingly upward trajectory.

He told Observador that the threat to declare the party illegal was ‘vile’.

As reports have explained since the start of the year (after Chega facilitated a centre-right ‘take-over’ following inconclusive elections in the Azores), this autumn’s municipal elections are being seen as the ‘next big opportunity’ for the party. Chega is fielding candidates in as many boroughs as it can. In the Algarve, for example, there are already candidates announced for all 16 council areas.

But if the party is suddenly declared illegal, of course, there can be no candidates.

Hence today’s protest, to which Ventura had been hoping for ‘thousands’. He got hundreds – many of which had been bussed into the capital specially from all over the country.