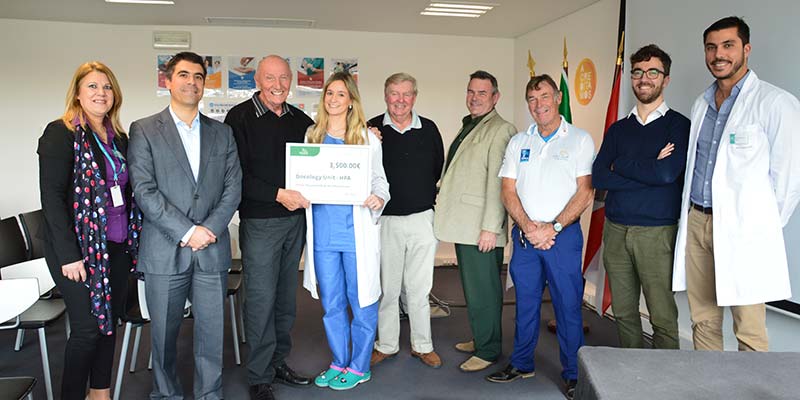 A total of €3,500 was raised for the oncology unit of Hospital Particular do Algarve’s (HPA) Gambelas Day Hospital in Faro by the husband and friends of Linda Hocking, who was treated at the unit for two-and-a-half years before she passed away in October.

The money was raised during a Memorial Day for Linda at Alto Golfe in Portimão and was delivered to the hospital’s oncology team by widower Trevor Hocking on Tuesday (January 22), in a bid to thank the team for treating and looking after his wife so well.

“The treatment and support that they gave us was absolutely incredible,” Trevor said.

“They were exceptional. I am grateful for all the care, strength and everything they did for us, and I am certain that nobody could have done anything more than what they did for us. I also thank all the members of Alto Golf who were tireless in the support and strength that they gave and continue to give me,” he added.

Trevor also said he hopes the money will help other people who will need the unit’s services “as we did”.

HPA said the money will be used for research and to purchase new medical equipment.

“At a hard time like this, when it is easier to complain than to recognise the value of our professionals, this is a commendable gesture,” HPA’s oncology team said.

Linda Hocking was a singer known as ‘Linda Saxone’ and released her first single, ‘Love is a Many Splendoured Thing’, in 1964.

She was also a member of Alto Golfe for 15 years and is remembered fondly by the club and its members “for her friendly and welcoming personality and all the work she put into looking after the members and being captain in 2015/2016”.

The club has thanked the sponsors who donated prizes and auction items for the Memorial Day, attended by 44 people, which included a Ryder Cup print signed by Bernhard Langer and generous contributions made by The Hexagon, O Barradas, Pôr do Sol, Big Reds, Mediterraneamente, and Marco’s restaurants as well as vouchers provided by the Linen Shop, Medal Seguros and Allianz.