Portugal Resident
Home Covid-19 How four can become nine: the real impact on the Algarve if... 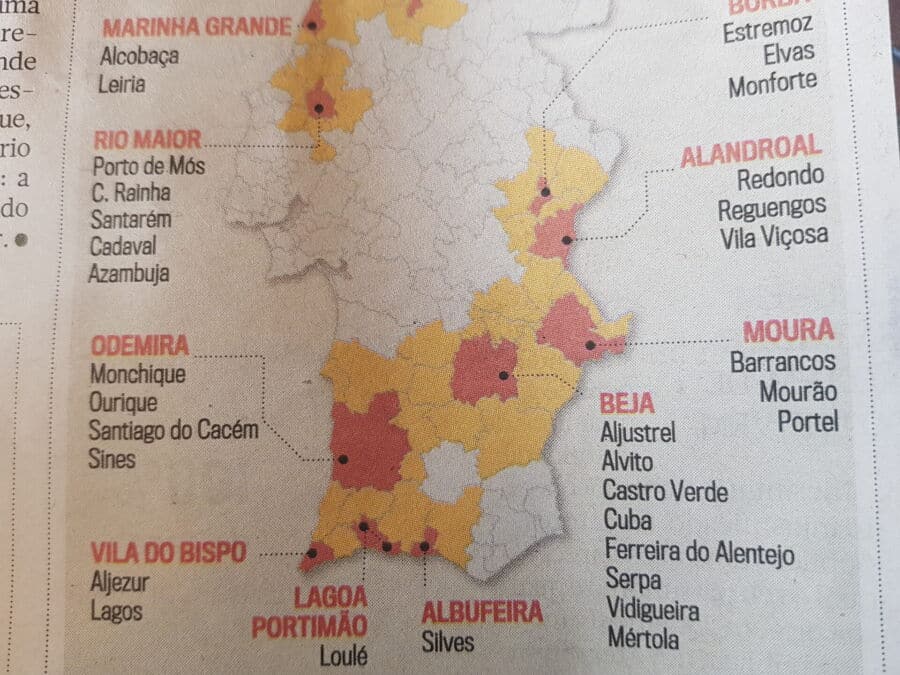 Five words. That’s all it took in the prime minister’s speech yesterday to threaten half the Algarve with prohibition of moving into deconfinement stage 3 (due on April 19).

Deconfinement stage three is when businesses finally can return to some semblance of normality: the plan is for restaurants to return to having diners INside the premises, as well as on esplanades and terraces; shops and malls are to reopen; outdoor events to resume, along with cinemas, theatres, auditoria and similar (click here).

But that is only if the government gives its green light, ‘according to established criteria’.

If these don’t see numbers improve in the next two weeks, “it means they and the boroughs around them will have to object of particular measures” – meaning they won’t be ‘advancing to step 3’ along with the rest of the country on April 19.

Yesterday no papers really latched onto this. Today, Correio da Manhã – possibly the widest read tabloid in the country – has presented a map, showing how those 19 boroughs mentioned by the PM could morph into 80.

If they do, they will scupper reopening hopes over half the Algarve, and the entire swathe of the Alentejo.

In the Algarve, the situation is that Vila do Bispo in the west and Portimão, Lagoa and Albufeira in the centre are all ‘on the limit’.

Vila do Bispo borders Lagos and Aljezur. Neither of these boroughs is in any ‘danger zone’ for transmission, but by dint of being the ‘surrounding areas’ of Vila do Bispo, they face being penalised.

Portimão is the ‘most at risk’ borough in the Algarve right now – registering over 240 cases per 100,000 inhabitants (way above the government’s ‘red line’ of 120). Portimão borders Lagoa (which is already ‘at risk’) which borders Silves. That’s six boroughs already under threat of ‘not moving to step 3’.

Then there’s the fact that Monchique is sandwiched between the borough of Portimão and Odemira (one of the Alentejan boroughs). So that makes seven.

Finally Albufeira is running with transmission over 120 people per 100,000 – so that  implicates Loulé for being ‘a surrounding area’.

This is the sinking reality coming clear today when the official mantra is that “only Iceland has better results than Portugal”.

Taking the rest of the country where 12 further boroughs have been identified by Mr Costa as needing to reduce infection rates, these could impact on another 43 concelhos in the centre and north, potentially devastating the hopes of thousands of businesses champing at the bit to be allowed to reopen.