Portugal Resident
Home Society Opinion Houseguests, or how many more days do we have before they leave? 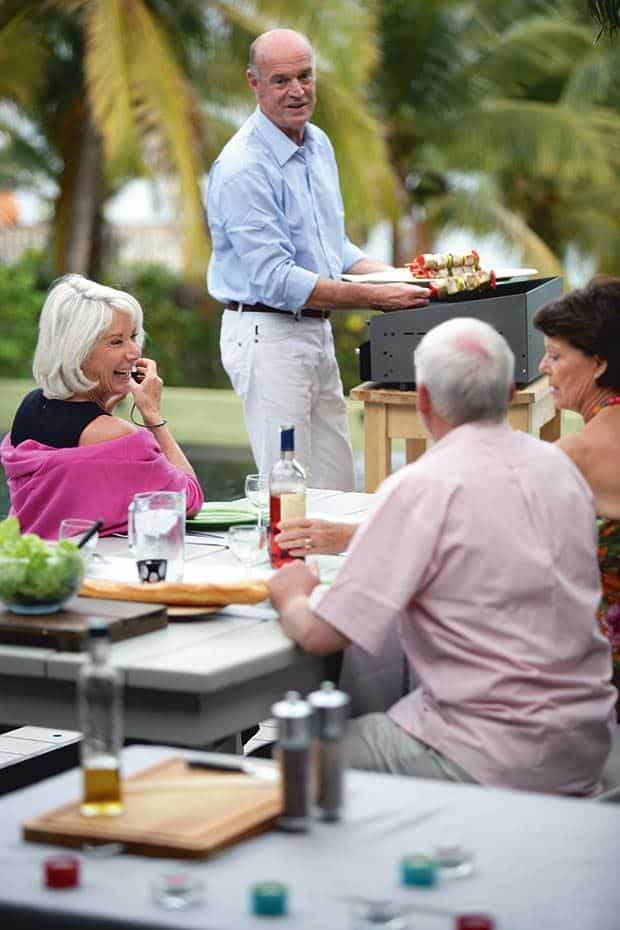 March was a difficult month to host visitors. Instead of an early spring with plenty of flowers blooming along sunny roadsides on the way to breezy beach cliffs, it rained most of the month with temperatures much below normal (whatever normal is with climate change, meaning that spring seems to arrive later every year, while England was buried in record snowfalls).

The Algarve is an outdoorsy place. Our rooftop terrace is a delightful spot to view the distant coastline, unless a gale is blowing the wine glasses off the table before the next intense shower hits.

Many of our favourite places to eat feature outdoor seating with scenic views of the ocean waves or rolling hills dotted with groves of olive, almond and cork trees. None of those places are as much fun when it’s a pain to run to the car without getting soaked.

Our dog Fluffy’s coat is fluffier than usual because of an extra thick winter coat.

Not all guests who forked over pricey airfares seem to understand that there is nothing any of us can do about the weather. Understandably they’re disappointed, but blaming their hosts is clearly unfair. That is until I look back at my posts on Facebook where I bragged that the Algarve can have 300 days of sunshine per year. Of course, that implies that there are maybe 65 days of rain, with springtime showers likely, but still it seemed a bit much that half the yearly rainfall came in one month.

So here’s hoping that April is not the cruelest month and does, in fact, lead to more May flowers. Let’s hope that March showers were just the beginning and that we’re back on track, because more of our friends and family are scheduled to arrive, since I expressly told them that April and May are ideal times to visit, before it gets maybe a bit too warm during the summer high (that’s for temperature) season.

Since we invited them, we obviously are looking forward to seeing how much the grandkids have grown or meeting mom’s new boyfriend, but houseguests are a mixed blessing. If you’re an expat, you’ve left people behind and frankly miss taking your goddaughter out to lunch and/or playing golf every Saturday morning with your regular foursome. However, you were seldom with any of these people for a week or more of 24-hour days; except your own kids (who now have their own uninhibited children).

Many of us (whose pensions have not been destroyed by Trump or Brexit) are lucky enough to have built our dream villa in the hills or at the beach, or we’ve purchased a luxury condo in Lagos or Tavira, or at least we’re renting a nice place. We’re talking square footage in abundance. Why? Among other valid reasons, so that we could have plenty of room to entertain. We’ve constructed our expansive nests as bait to lure our family and friends down for visits to scenic, historic Portugal.

What were we thinking? Did it ever occur to us that a number of contacts on our e-mail list would actually break down and buy an airline ticket?

Children are a necessary evil. Most parents feel obligated to stay in touch with their grown kids and so, the offspring eventually show up, especially if you pay for the ticket. Unless they have kids of their own, and if they’re younger than 35, almost inevitably, they take off for Lisbon or Vilamoura in a matter of hours. So they’re no problem. If your kids have kids of their own, you’re in for a week to 10 days of hell, biting your lip as your progeny demonstrate, every 15 minutes or so, that they have no clue when it comes to raising children.

Most of your Portuguese handicrafts, as well as heirlooms you managed to ship unbroken from Glasgow, will be destroyed. Many parents on vacation seem to lose their peripheral vision and don’t seem to notice their children running through the restaurant or toward the deep end of the pool. We notice though, don’t we? If the dog doesn’t mind the cute little girl pulling his ear, why haven’t we seen it in two days? Thankfully, the little devils and their oblivious parents have a home to return to.

So, what about other relatives? Like, let’s say your parents. Since they’re retired, they tend to come down for longer stays – two weeks to a month. British parents seldom travel unless they’re staying for at least a fortnight, which apparently stands for no less than a month, if not longer.

No matter, Mom and Dad will have successfully driven you crazy by the third day. The rest of the stay is more like purgatory, which you must endure if you want to remain included in the will. Most parents don’t disapprove of your new lifestyle even though “that’s not the way we do it back in the States”; rather, they become concerned and offer sincere advice, which almost always involves returning to your childhood home, now that real estate has become “so affordable”. Remember Mom’s home cooking? Well, your mother does, and she seems more than willing to share her expertise with your second, much younger wife, who apparently has no idea what she is doing in the kitchen.

Other relatives offer their own unique challenges. After a few years of living separately, we tend to forget why we moved away from home in the first place. Cheap brothers (the ones that leave for the men’s room whenever the check is requested); insecure sisters (the ones that end up calling their shrink back in New York on your cell phone); alcoholic brothers-in-law (the ones that have a flask in their suitcase and still manage to drink a 12-pack of Super Bock before dinner); uncles who cheat at golf; fat aunts who show up poolside in bikinis; cousins who you don’t remember exactly; mothers-in-law in general; and any parent who has remarried some much older or younger or simply “evil” person – each in their own way will try your patience to very near the breaking point. However, you cannot tell them to “get out!” like you did that one Christmas, because they’re staying in your guest room and have no other place to go.

So, how about your friends? You know, the ones who were always so much fun at the country club; or on the cruise; or were so reliable with the car pool or coached your kids’ soccer team? This vast and unpredictable category of visitors can include elementary school classmates; fraternity brothers; sports teammates; colleagues from work; fellow church members; expat social members; or somebody who you met on the plane, during one of your previous visits. This diverse group has one thing in common – you’ve never actually lived with them for any extended period of time before.

Now your dear, dear friends are ensconced in your guest room and coming out occasionally to carefully explain their very strict dietary requirements. They don’t seem to be able to relax and so they “need” to get on your computer for hours at a time. Some probably won’t erase everything, but some will. They snore so loud that you’re afraid the apartment will implode, but they complain in the morning that their bed is too soft or firm (choose one).

They don’t know what they want to do, but they hated walking around any of the old-town city centres (“needs a coat of paint”) or any hill-top castles (“just a bunch of ruins”); and they don’t like the beach (“too hot” and “way too sandy”); or cliffs (“too steep” and “scary”); but they don’t like the mountains either (“too cool” and “nothing’s goin’ on”). They want to go on a hike but get a blister after the first kilometer. So we decide to rent bikes, which they almost immediately crash into a souvenir stand. And they don’t understand why “not everybody over here speaks English”.

A lot of times, a visit by folks from home becomes quite a chore and, to be honest, we’re often relieved when they leave. So why do we do it? Well, here’s what ol’Pat thinks – Portugal is such a lovely, special, unusual place that it’s simply wrong not to share it with the rest of the world, especially the ones you love. Also, we forget what they’re like, and it takes a nice long visit to remind us.