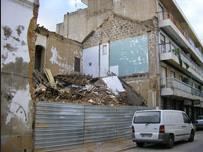 AN UNOCCUPIED house in the centre of Faro collapsed in the early hours of Wednesday, November 29, apparently due to the extremely heavy rain of the previous day. According to the emergency services, nobody was hurt.

The house, located in Rua Infante D. Henrique, close to the city’s train station was empty and, according to a source from the Comando Distrital de Operação de Socorros (CDOS), the district control centre for emergency assistance, it fell to the ground at close to 4am. Three fire engines, carrying eight bombeiros, together with a civil protection team attended the scene.

In the Algarvean capital, traffic came to a standstill in many streets and some shops were forced to close.