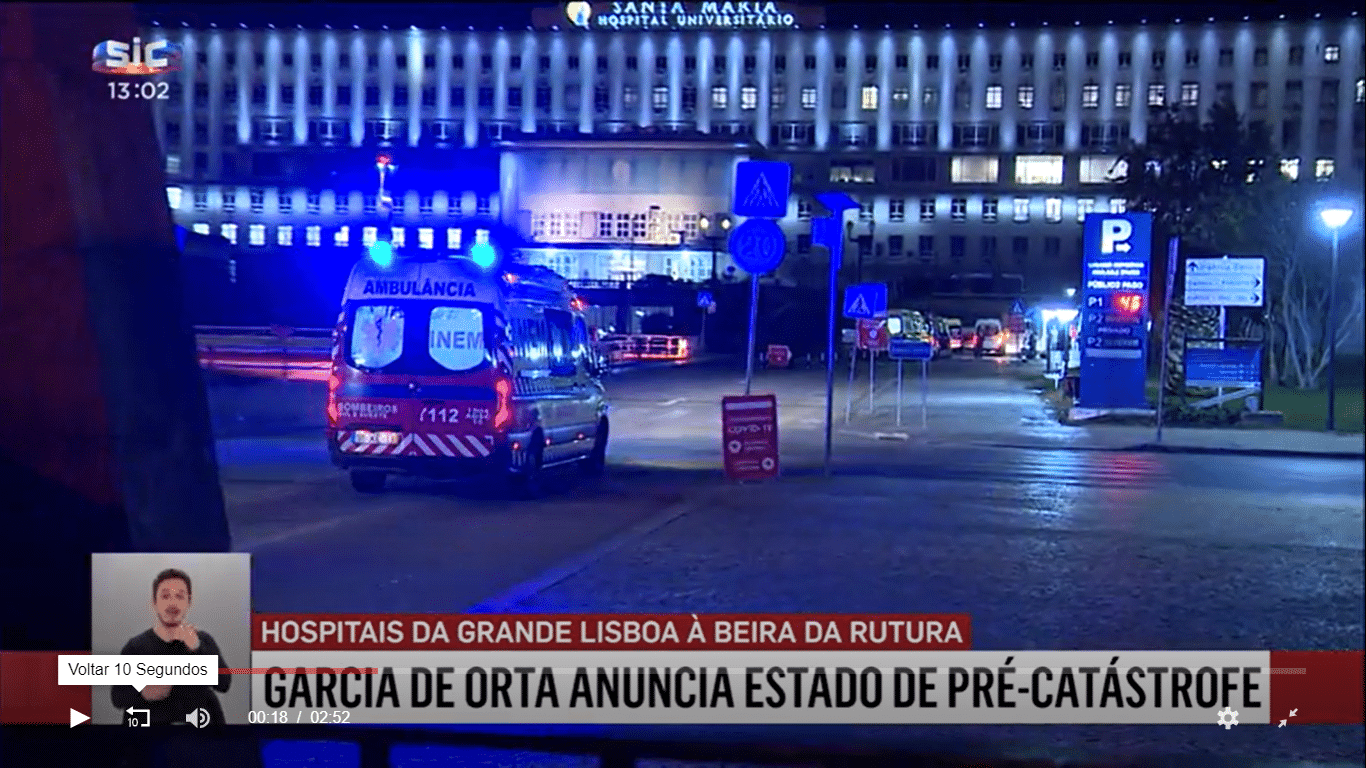 It’s the story of the last 24-hours, with the first hospital to announce it was approaching a state of pre-catastrophe that of Garcia Orta, in Almada (Lisbon outskirts).

With Lisbon/ Vale do Tejo one of the worst affected areas in Portugal, dozens of patients have already been transferred to outlying hospitals, including to the Algarve, where Portimão ‘field hospital’ has been receiving patients from Lisbon since it opened a week ago.

Garcia Orta announced that it had reached a level of (bed) occupancy 250% above its contingency levels.

A source from the hospital’s administrative body told reporters: “If this continues, the hospital will be in a scenario of pre-catastrophe”.

The spectre of lines of ambulances parked outside the capital’s hospitals waiting for the green-light to decant passengers has marked the last week. Doctors insist it is imperative that the State takes advantage of the private and social sectors which between them offer at least another 400 intensive care beds.

Earlier last week, health minister Marta Temido intimated that a civil requisition of private hospitals was definitely on the table (click here) as long as the government was able to negotiate a ‘just price’.

This may be the sticking point. Certainly presidential candidate Ana Gomes believes President Marcelo has something to do with the civil requisition not moving forwards.

She told journalists as she campaigned in Coimbra yesterday: “He has undermined, stopped, a better negotiation of the State with the private sector for them to collaborate at a just price instead of at the exorbitant rates that they (the private hospitals) want…”

Says Miguel Guimarães, the president of the General Medical Council, the situation as it is today is “dramatic… unacceptable”.

In the Hospital Beatriz Ângelo (Loures, again within the Lisbon area) the habitual oxygen bottles that are placed beside the beds of patients who need oxygenating have run out. “We’re using larger bottles – that are not habitual in this type of procedure – at the same time as trying to reinforce stocks”.

It’s not a ‘desperate situation’; patients at Beatriz Ângelo are not running the risk of death due to this failure, but it is also not ideal.

In Setúbal’s Hospital São Bernardo patients arriving at the casualty unit are having to be treated on the floors, as all the stretchers are already occupied.

Daniel Ferro, president of the administrative council of CHUAL, the university hospital centre of Lisbon north, has stressed things simply cannot go on like this.

“This hospital (Santa Maria), which is an ‘end of line hospital’ (one specialising in treatments for critical cases) is already treating patients well beyond its capacity. We are not the only hospital where this is happening”, he added, calculating that demand for Santa Maria’s bed space and specialities had increased 70% in the last two weeks.

“We cannot continue like this for another week or two. We have that the situation stabilises. Really. Adaptation has limits, and the contingency plan we put in place last week has been exceeded”.

Santa Maria was caring for over 200 Covid patients yesterday, of which 44 were in intensive care.

It recently installed another 50 beds (10 for critical patients).

In Torres Vedras the pressure is also excessive, with 157 patients interned, and admissions waiting hours for a hospital bed on stretchers.

For the time being, there has been no further talk of ‘civil requisition’ of private hospitals – nor of facilities in the social sector – but behind the scenes this is likely to be being pushed to the hilt.

Bloco de Esquerda coordinator Catarina Martins for instance has been calling for a civil requisition for well over a month,