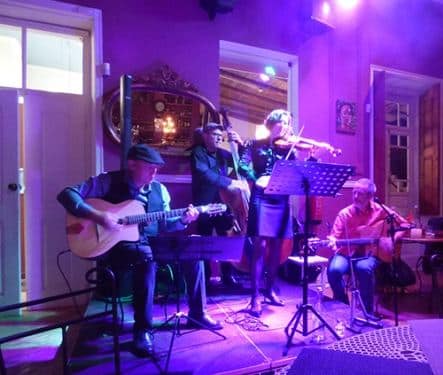 While the singers, actors and dancers are all busy rehearsing for the upcoming performance of Honk! The Musical, one member of the crew has been particularly busy.

As the musical director, Trevor Herrington has to coordinate six hours of singing rehearsals for a cast of 30 each week and has been doing this since last September.

He said: “The cast just turn up and sing. I have hours of preparation getting the arrangements together and coordinating with our accompanist”.

While busy behind the scenes, Trevor is also preparing for his part, playing the ugly Bullfrog who befriends the hero of the story.

This is not the only project that Trevor is involved in as he is an active member of the Lagos Choral Society, the International Choir in Aljezur and is an active walker with a group in Vale de Telha where he lives.

Trevor said: “I am delighted to be involved with Honk! The Musical and watch people discover voices they did not know they had. Some have not sung in public before.”

He added:  “There is something for every age in this musical and I hope as many people as possible come and see it, you won’t be disappointed,” added Trevor.

Honk! The Musical opens on April 21 and runs until April 23 with four performances at Lagoa Auditorium. Performances are from 8pm each night with a 3pm matinee on Saturday April 23.

For further information, please visit www.honkthemusical.webs.com Tickets can be ordered through the site or by calling 282 789 608.  Tickets are also available from the offices of the Algarve Resident in Lagoa, please call 282 342 936