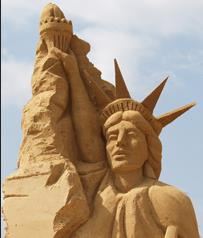 HOLLYWOOD FILMS will be the theme of this year’s Fiesa sand sculpture festival, which is due to open in Pêra on May 22.

This year, more than 35,000 tonnes of sand will be sculpted by around 50 international sculptors who will bring films such as Indiana Jones, Jurassic Park and Alien alive with sand. The festival will also include an area dedicated to sculptures representing Portuguese films.

Since starting in 2003, Fiesa has recorded an increase in visitors of around 180 per cent, being one of the largest events of its kind in the world, with sand sculptures reaching 15 metres in height.

Fiesa will be open everyday between 10am and midnight until October 22.