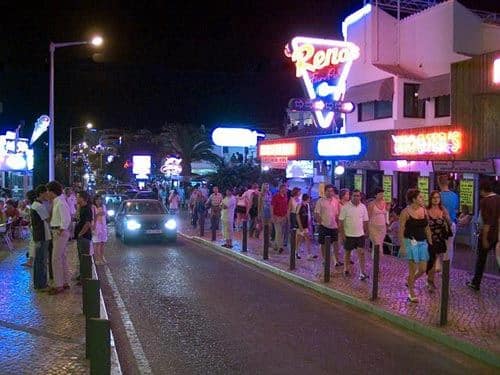 As details start emerging of the violent knife attack that left a bouncer known as “a peacemaker” dead, and his aggressor “gravely injured”, holidaymakers caught up in the horror have described their fear as Albufeira sank, once again, to new depths of depravity.
“I was absolutely terrified,” a French tourist named as Sabrina told news media yesterday.
Her boyfriend Mateus explained how the couple had been out on the town with friends when all hell broke loose around 3am on Wednesday morning.
“There was someone trying to get into the bar but they wouldn’t let him. He seemed to get very angry and pulled out a knife, stabbing the barman and the bouncer.”
António Guimarães, known locally as ‘Guimas’, “had his hand to his chest, but he could still stand”, a friend took up the story. “Then he started to say he couldn’t breathe.”
By the time INEM’s medical team got to him, the 40-year-old bouncer had suffered massive blood loss.
It now appears that his aggressor had been barred from the bar three nights before the attack. This was the root of the horror, claims Correio da Manhã this morning.
“The 27-year-old returned to the bar with three friends to get his own back.”
The violent brawl ended with Guimas being stabbed twice, the barman being stabbed once and the aggressor suffering “grave injuries” with his “face completely disfigured”.
Initial police reports on Wednesday morning talked of two deaths – but the aggressor is understood to have been transferred to a specialist unit in Lisbon for jaw and facial injuries. According to CM, PJ police have mounted a “tight security” operation at the hospital, and the man is expected to be arrested as soon as he is discharged.
The three friends who accompanied him to the attack at Second Bar in Avenida Sã Carneiro, in the notorious Oura drinking district (see below) are all believed to have suffered light injuries, and have already been interviewed by police.
The 23-year-old barman, who was also stabbed in the chest, is understood to be out of danger.
Oura district a “no go” den of drugs and drink after 3.30am
Despite all publicised efforts to boost security in Albufeira over the holiday season, it is still known as a major trouble spot marked by drug-taking and excessive alcohol consumption.
According to CM, the hours between 3.30am and 4am are the ‘danger hours’. These correspond to the times the bars close and bawdy drinkers descend on the streets.
“It’s the time when the most drunk people are on the streets. Drugs and drink here are a real problem,” popcorn salesman Gabriel Pereira told reporters.
Tragically, Pereira knew Guimas well and “had been talking to him only a few minutes before the attack.”
“Everything was calm at the time,” he said – but of course that was before the witching hour of 3.30am.
Catalogue of chaos
Chaotic scenes have marked almost every summer for the last decade, with Albufeira’s name being dragged into the mud endlessly on local, national and international media.
2004 was perhaps the worst disgrace – when the town was marked by nights of violence spurred by drunken England football fans during the Euro football championships. The fallout of those horrendous days returned to the headlines earlier this summer, when four fans were called back to Albufeira to face various charges of hooliganism. None of them turned up.
In 2011, the town was marked by a series of violent attacks on visiting holidaymakers, one of whom Briton Ian Haggarth died. Two months later a young Portuguese man, Ricardo Teixeira, was so badly beaten by a nightclub bouncer that he died days later never having regained consciousness.
Police call for stiffer fines
The only solution, say police, is to come down hard on bar brawls and trouble-makers. As the Resident reports in this week’s printed edition, police up and down the country are being attacked these days in drunken fights in which aggressors seem to show no respect for the law.
“It is hardly surprising,” said one officer. “We haul people in, they go before a judge and are back out on the streets the next day!”