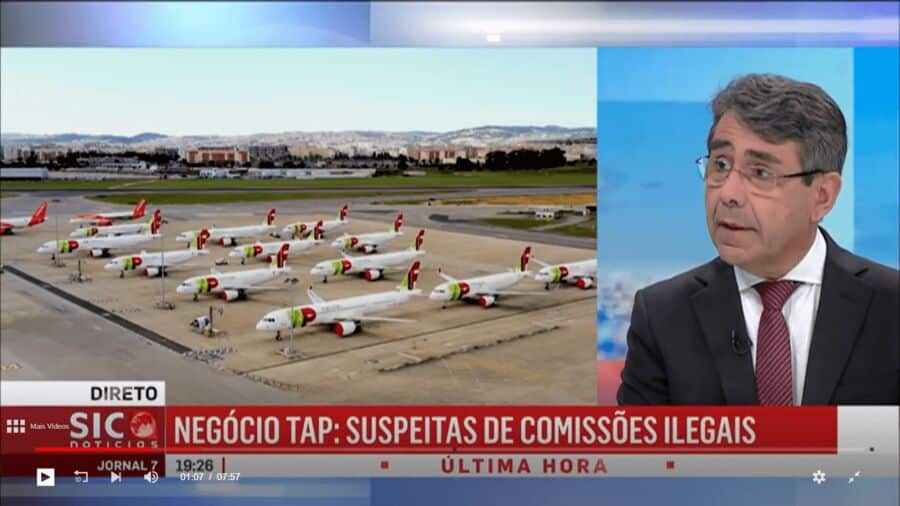 SIC television news broke the story last night that “the ministers of finance and infrastructures have sent a joint complaint to the public ministry over suspicions about airplane purchases by TAP”.

SIC stresses that it “knows” the complaint centres on the payment of commissions to third parties – resulting in TAP actually purchasing planes at a higher cost than its competitors.

At issue, explains the station, are 52 Airbus planes acquired during the management of Fernando Pinto, with (Brazilian American) David Neeleman as majority shareholder.

The deal began with the purchase of 12 A350 planes, which ended up becoming 52 – not all of them Airbus, says SIC.

José Gomes Ferreira, the channel’s veteran financial journalist, “responds to the doubt that hangs in the air: was the purchase of these planes made due to necessities of the company, or not?”

This is the whole point, he told news anchor Miguel Ribeiro. “When you have a company in which organic growth is to add new routes and operations – new destinations – and then one realises that for every (destination) that opens, two or three close, but the planes have already been purchased, then suspicions start to build up.

“It wasn’t possible for TAP to grow in so many areas at the same time, and guarantee that all those deals were profitable (…) the logic that existed was this: TAP had been sold to a private investor, who in turn entered into a complicated business deal” which in itself “raised suspicions” (…) “and then insisted on buying not 12 but 52 planes, part of which were obviously to replace those that were at the end of leasing contracts, but not all of them – the others were to ‘grow the operation’.

“Add to this a special circumstance”, Gomes Ferreira continued. “When TAP was sold, the banks received comfort letters saying ‘watch out, if this deal to sell TAP goes bad, you will always have your money guaranteed’.

“The logic is crystal clear, they wanted to buy more and more planes, much of it not to grow the business but for someone to make money. It is this that one concludes from the whole story. Finally, there is a report that has it written on paper that the values that TAP was paying for the purchase (leasing) of the airplanes had values, even by today’s standards, not in accordance with market practice for other companies –  someone was getting paid on the side. Who was it? It’s up to the authorities to investigate. But it’s already very late. This should all have been investigated a long time ago”, Gomes Ferreira added – having referred to information he received “some years ago” from an “excellent source” within TAP who was told that commissions on the purchase of planes were “the way of the sector”…

“Even here in SIC, we have never stopped talking about this”, he said. Yet it has taken all this time for an investigation to (begin) to move forwards… The crime of “harmful management” may not be one that tends to result in many convictions in Portugal, he conceded, “but this may not be just ‘harmful management’. This could involve corruption and other kinds of crimes.

“If this situation is really investigated, it could reach many places”, he said – albeit discovering where these alleged handouts went will not be an easy task.

These kind of deals generally involve “offshores and companies in tax havens”, he said  – going even further and suggesting everything in this story “involves a central bloc of interests between the (country’s) two largest political parties” that could even stretch as far as landowners of sites now earmarked for development of Lisbon’s second airport, which TAP’s strategy of bringing in planes from all over the globe has been insisting on.

“History is repeating itself”, said the financial analyst. “It’s cyclical”.

At this point Miguel Ribeiro started to wind up the interview, but Gomes Ferreira managed to get in that he hopes “this time authorities will go further than they have in the past to discover who really has been playing with the money of the Portuguese”.