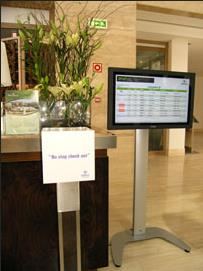 Faro airport and the Hilton hotel in Vilamoura have teamed up to offer travellers a new remote flight information service in real time.

The system, known as SIRVTR, was unveiled at the hotel on Thursday, April 17 and was created by the Airports of Portugal (ANA). It will allow public access to details of flight schedules at the airport in Faro in coordination with hotels.

The Hilton will be the first hotel in the Algarve to offer the SIRVTR service to its guests.  It is hoped that this will help users to access information on not only the airport but also details about the hotel.

António Correia Mendes, the Director of Faro airport, described the new service as an important step towards the “cooperation of all the sectors in the tourist industry”.

The Director General of the Hilton hotel, Alessandro Cabella, said: “The partnership between the airport and the hotel was as a result of requests by guests.”