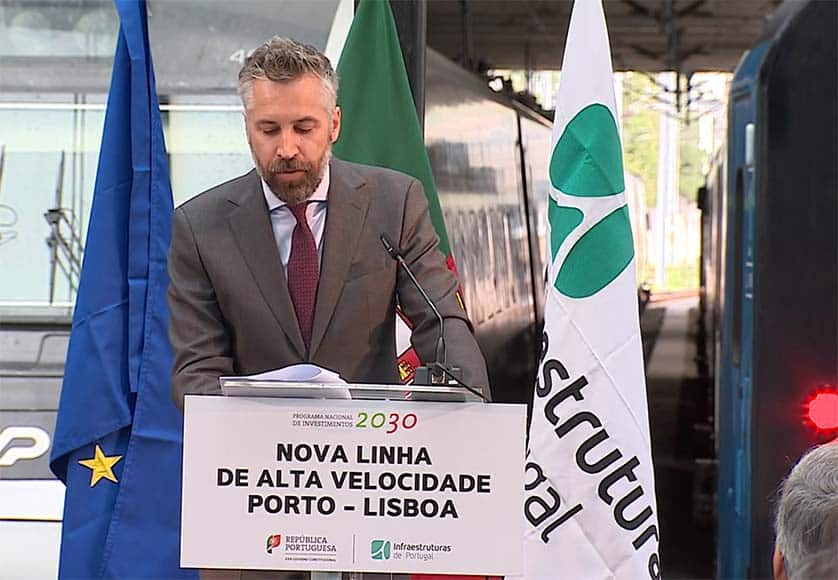 The Portuguese government announced yesterday a massive project to build a TGV high-speed railway between Lisbon and Porto, cutting the travel time between the two cities to just one hour and 15 minutes, with no stops along the way.

The project represents a mammoth investment of around €4.9 billion until 2030, when the new railway is expected to be completed.

Despite the energy crisis blighting all of Europe which has forced Portugal to present its own energy-saving plan and which business news giant Bloomberg says has made a “continent-wide recession now seemingly inevitable,” Prime Minister António Costa guarantees that Portugal has the financial security to move forward with the project.

“The country today has financial conditions to be able to move forward with this project with tranquillity,” said Costa at the project’s presentation, adding that there will be no issues that will jeopardise it.

“This is a project that unites the country, serves the whole country and strengthens the Atlantic front, which helps our projection in the world and historical role of being the interface between the (European) continent and the huge Atlantic world,” said the PM.

Portugal’s Minister of Infrastructures has described the project as a “revolution” and as the “base for the development of society”.

“The lives of the country and those who live here will be better,” said Pedro Nuno Santos, adding: “The country needs to invest to recover the decades that it is overdue. We cannot hesitate or postpone anymore.”

The first phase of the project will involve the construction of the Porto-Soure stretch, described by Carlos Fernandes (board member at infrastructure authority Infraestruturas de Portugal) as the “busiest stretch of the northern line”. Construction is due to be completed by 2028, when the duration of the train ride between Lisbon and Porto will be reduced to just under two hours.

The second stretch, linking Soure and Carregado, is expected to be completed by 2030 and will bring the duration down to just one hour and 19 minutes, followed by the Carregado-Lisbon link which will be the last to be completed (likely in the next decade), reducing the trip by another four minutes.

Carlos Fernandes also guaranteed that the high-speed railway will be “totally integrated” with the rest of Portugal’s railway, adding that several links between the high-speed line and the rest of the national railway are planned.

The Portuguese government is also planning to eventually link the high-speed line to Vigo in Spain.