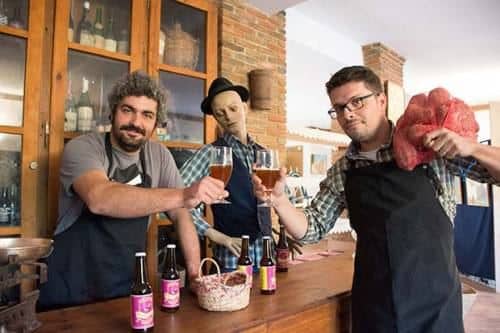 The group received a wonderful welcome from their hosts and were, therefore, heartbroken to see the loss of life and devastation that the flash floods and mudslides caused recently on the island.

On the weekend of April 16 and 17, Marítimo play the return fixture in Olhão.

In an effort to raise funds for the Disaster Appeal, three Tavira residents, Larry Bawden, Neil Richardson and Chris Wright who were on the original trip, will have their beards shaved-off on the day of the game.

Neil Richardson said: “This is the very least we can do to help the community of this beautiful island. The people were so hospitable and welcomed us with open arms.”

Larry Bawden has had a full beard for 20 years while Neil Richardson and Chris Wright are growing beards. The three hope to raise in excess of 1,000 euros and are already over halfway to their initial target.

A number of cafés and shops are supporting the initiative by holding raffles and these include Beira Rio Restaurant & Irish Bar in Tavira, Restaurant Fonte Nova in Pechão, Ma’s Bar in Manta Rota, furniture warehouse Frontera on the EN125 at Fuzeta, Cara’s Hairdressing Salon in Tavira and Mad Hatters Riverside Bar in Tavira, where donations will be gladly accepted.

Algarve resident Sheila Watts, author of the Practical Portuguese series, visited Madeira Island after the storm. Read her report in next week’s edition of the Algarve Resident.

For further information on how you can help, please email