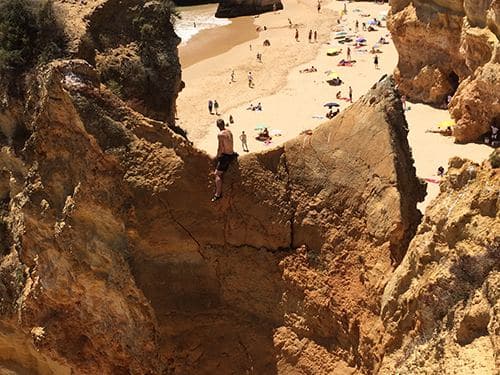 After months of preparations, training and fund-raising, Algarve resident Jen Hurst completed the London marathon earlier this month in just over six hours, raising more than £2,000 for charity.

Now back home in Carvoeiro, Jen told the Algarve Resident how the experience had been one mixed with both pleasure and a fair amount of pain – but one that she wouldn’t trade for the world.

“I went down with flu just before I left for London and I had a temperature as I made my way to the start line with my running partner Janine Wood Simon,” she said.

“We ran the first half of the race together but there was no way I could stay with her for the second half so I continued on alone. Although I was feeling terrible, I have to say that the whole experience was amazing.”

When Jen reached the 13 mile mark, she spotted an old friend in the crowd who she hadn’t seen for more than 30 years: “I was crying and wondered how on earth I would make it when I spotted my old friend. She had found me on the JustGiving charity site and walked with me, boosting me to go further.

“I have no idea how I made the 18 mile mark but this is where my son Elliot was and he gave me a sweatshirt because I was shivering. By mile 19, I found my daughter Lucy and she had spare clothes for me to change into before I set off again.”

The support of her family, friends and strangers who cheered Jen on helped her to conquer the pain and continue.

“At mile 23, a man from the crowd gave me his pint of beer and as I drank it down, the crowd cheered. They were awesome and because of them I can honestly say that I smiled most of the way around.”

Jen Hurst ran the London marathon to raise money for the Gaucher’s Association, a charity which supports sufferers of this rare disease and funds research into the disease.

“She was the most amazing 10 year old I have ever met and although she is tiny with the height of a six year old, she has the head of a 20 year old and I am proud to have been able to support this charity,” said Jen.

“The support on the marathon was unbelievable and I realised there was no shame in walking as I was surrounded by people in pain or disabled yet so determined to cross the line for their own charity.

“It may have been Hell on legs but it was worth every second of the six hours and three minutes.”