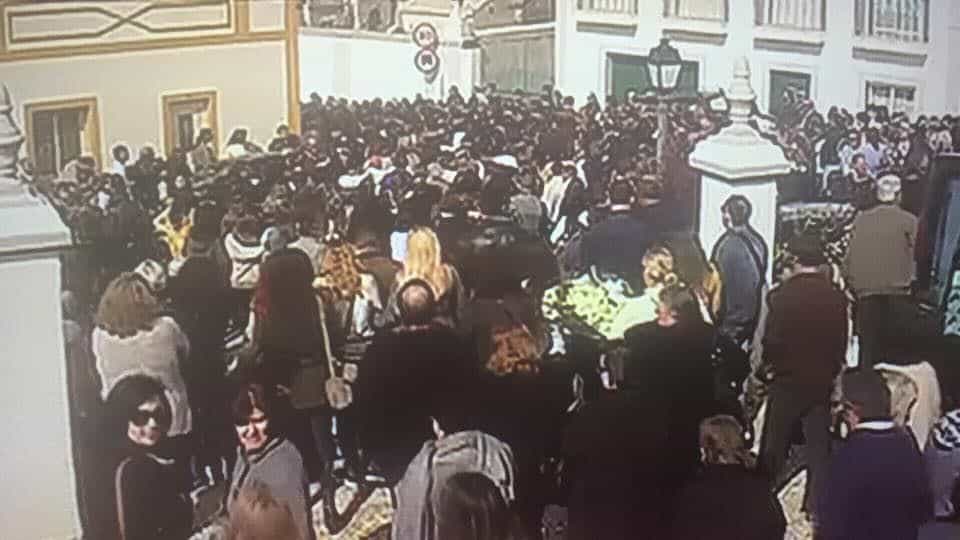 After tense scenes last night at the pre-funeral vigil of murdered Algarve teen Rodrigo Lapa, the 15-year-old’s funeral has taken place in Estômbar attended by schoolfriends, teachers, janitors, members from both sides of his divided family as well as many hundreds of people shocked by the terrible circumstances of his death.

The boy’s mother Célia Barreto – who had been forced to leave last night’s vigil after outraged mourners hurled threats and insults at her – was flanked by police as she entered the church by a side entrance.

No longer does she carry her baby daughter – the fruit of the relationship with the man suspected of killing Rodrigo. The child was removed from her care on Friday evening by the Commission for the Protection of Children and Minors.

Célia Barreto was safely taken inside the church and the side door closed as more police stood on guard outside.

But while the mortal remains of the boy may now have been laid to rest, there is still no end of confusion raging over what will happen next.

National tabloid Correio da Manhã has revealed that Rodrigo died after a violent struggle in his own home which woke his mother up.

The 40-year-old mother claims she heard the fight between her son and the father of her baby, but that she “never imagined he had been murdered”.

Why she did not get out of bed to find out what was going on is one of the principal questions left hanging in the air.

“Célia Barreto was in the house when her son was tortured to death”, writes CM today. “There are now no doubts remaining that Rodrigo Lapa, 15, was assassinated in the house he shared with his family in Sítio das Vendas, Portimão. The youngster was tied up after his death, to make it easier to carry the body to scrubland 100 metres away. The PJ have found proof in the house that shows this. Célia says she was asleep and awoken by the noise of the argument between her partner and her son… the relationship between stepfather and stepson was full of conflict but Rodrigo’s mother guarantees that she thought her son had run away from home”.

The non-sequiturs in this narrative have led the mother of one of Rodrigo’s friends Inês Louzeiro to tell SIC television news that she has spoken privately with the PJ about “grave” situations in Rodrigo’s home environment – and about the fact that the fatal fight may have had nothing to do with the money Rodrigo’s mother claims he had ‘stolen, to buy an iPhone’.

It may have had to do with the fact that Joaquim Lara Pinto was planning to take his daughter with him to Brazil, and Rodrigo had sworn in front of friends and Inês Louzeiro that this would only happen “over his dead body”.

“I begged him not to say things like that”, the emotional woman told SIC.

Those words were spoken on Thursday evening (February 21) – the last time friends saw the boy alive.

For now, Joaquim Lara Pinto’s location in Brazil remains uncertain. He is not in any of the homes of family members, says CM. And Célia Barreto’s position in the ongoing police investigation is simply that of a ‘witness’, not an ‘arguida’ (official defendant).

Whether this changes is what everyone is waiting to find out.

Algarveprimeiro explains: “the accounts of the mother make the discovery of the truth difficult due to the number of incongruencies in her statements to police”.

Meantime, the baby removed from Célia Barreto’s care is likely to remain in an institution for “a period that could reach six months”, says SIC television news.

This evening, youngsters behind the Até Sempre Rodrigo Lapa Facebook page, which now has over 28,000 followers, will be holding a final homage to their murdered schoolfriend, at Portimão riverside (click here)