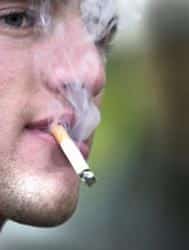 A PROPOSAL has been made by the Ministry for Health to prohibit smoking in closed public spaces and increase the minimum age for purchasing tobacco to 18. The proposal is currently in the two-month public discussion phase and, if it is approved by the minister’s council, it will be put before parliament. It is expected that the new law will come into force within a year.

The draft law foresees a ban on smoking in enclosed public spaces including workplaces, restaurants, bars and cafés, nightclubs, galleries, health and educational establishments, shopping centres, enclosed phone booths and cashpoints, and in old people’s homes. Establishments with a surface area of more than 100sqm can permit smoking, but must create a special area for smokers.

Health Minister, Correia de Campos, believes that this law, which is far more prohibiting than the current legislation, will help to discourage young people from taking up smoking, reduce the number of existing smokers and help cut down passive smoking, especially for bar and restaurant workers.

If the law is passed, cigarette packaging in Portugal will be required to feature the already existing health warning, as well as shocking colour images of corpses, blocked arteries due to smoking and other pictures depicting the symptoms of respiratory illnesses.

Those not respecting the new rules will be liable to pay a fine. If approved, penalties for individuals will range from 50 to 1,000 euros, for companies and institutions between 100 and 2,500 euros and for sites not displaying the requisite signage, between 2,500 and 10,000 euros.

Opinion is strongly divided on the proposal. Owners of Tabacarias (corner shops selling tobacco) claim the new legislation will put them out of business, while café and bar owners are predicting loss of trade and problems with clients, especially those establishments that do not boast an area of more than 100sqm.

Smokers can only hope that the new law will make it easier for them to quit the habit ….