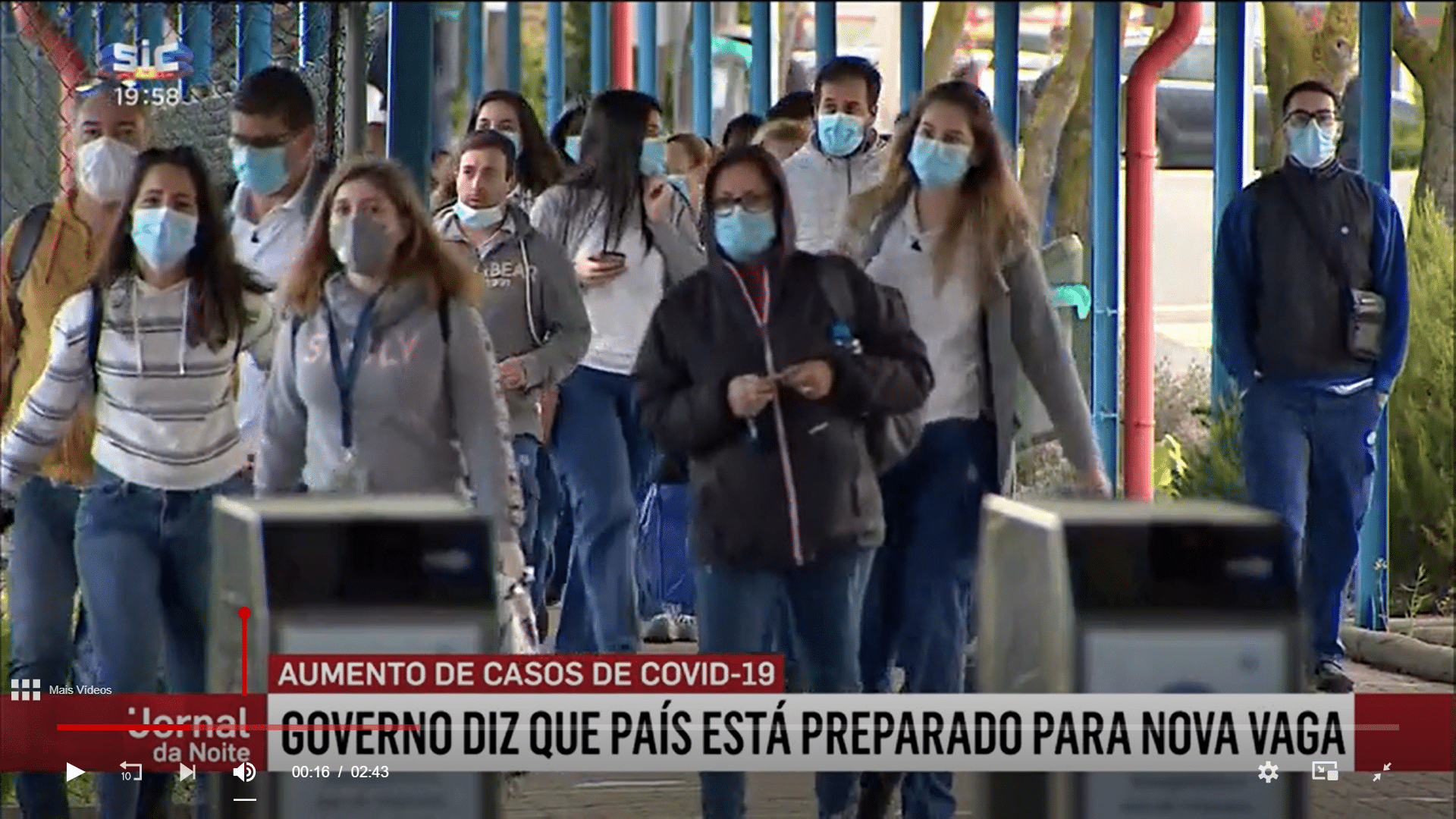 Health minister Marta Temido is today being reported “not be be ruling out a new confinement” as a 5th wave of the pandemic seems to be washing into the country in spite of over 87.5% of the country having been fully-vaccinated.

Today’s (Saturday’s) situation is that there have been 1,816 new cases recorded in the previous 24-hours, taking the country well into the ‘red zone’ of the risk matrix – used by authorities to explain how the virus is progressing.

The Rt number (which needs to stay below 1 to see the virus being ‘beaten’, or at least kept at bay) is now at 1.15, meaning transmission has increased to 134.2 cases per 100,000 inhabitants nationally (133.3 if one only counts mainland areas).

The number of people in hospital has now broken through the 400 barrier (it had been in the 300s for weeks), and is standing at 424, with 13 further admissions in the last 24-hours, and four extra people taken into intensive care.

Deaths are still ‘low’ (today’s tally just eight), which will be attributed to the protective effect of the vaccines – but the urgency is to revaccinate all seniors (over-80s down to everyone over the age of 65) as it is accepted that even double-vaccinated seniors run the risk of contracting Covid seriously if their vaccines were administered more than six months previously.

As one comment doing the rounds on Facebook today admits, the country has reached the difficult moment of trying to convince anyone who hasn’t been vaccinated that the vaccines are safe and ‘work’ –  and anyone who has that they need to take a booster shot if they are of a certain age.

It’s a tough call – and the seriously cold weather hasn’t even started.

No-one is referring to deaths being among the unvaccinated (as they almost certainly are not): they are in the over 60 (mainly over 80) age-groups: sections of society that responded to the call to get vaccinated in huge numbers.

These age groups however do remain the groups with the least number of new infections.

This is a pattern that recalls previous waves, and corresponds with areas of greatest population density.

The autonomous regions of Madeira and Azores are generally ‘behind’ and remain this way today: Madeira (with a greater population density than Azores) with 67 new cases in the last 24-hours; Azores with 29.

Broken down by regions, the new case numbers do not appear ‘high’, but pandemic experts have gauged that within the next 15 to 30 days, the country could well be running at over 240 cases per 100,000 inhabitants – one of authorities’ ‘red lines’.

INSA, the public health institute Dr Ricardo Jorge updating advice constantly according to data has warned that “the worsening of the epidemiological situation in Europe, and the increase of the intensity of the epidemic in Portugal” should see demands on the health service increase within the next month.

This is where the health minister’s open-ended warning came: “All scenarios are open”, were her actual words. Ms Temido did not mention the words ‘lockdown’ or ‘confinement’: these were possibilities put to her by the press pack.

But the bottom line is that to avoid ‘the worst of what the winter could bring’, seniors are being urged to get their protection reinforced with both flu and Covid booster shots.

Ms Temido admits there will be “difficult moments” over the next few days, but “guarantees” that authorities will be doing their best to sort out hitches so that people are not left waiting and/ or queuing for hours (as they have been).

To “accelerate” the whole task ahead, authorities are asking all seniors over the age of 80 to simply turn up at vaccination centres whenever they can to be vaccinated, and not wait for any DGS text messages or other means of contact.

For now, roughly half the number of seniors that require booster shots have received them (450,000).