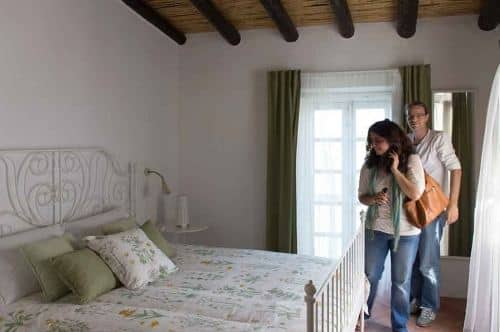 After 35 years in the TV and film industry, June Lover retired to the Algarve in 2006. Having owned a holiday property out here for 12 years she now lives in the hills above Almancil.

The holiday season will soon be upon us. In a few short months, we’ll have wall-to-wall sunshine and beachloads of wall-to-wall burning flesh – a timely reminder that the summer sun is a dangerous element.

But who cares about the sunburn? The farmácias will make a profit and the local economy will enjoy its seasonal boost. I love the summer season. It feeds my appetite for people-watching and satisfies my craving for mischievous amusement.

Life in the Algarve is just one long holiday. There is no longer any need to pack a suitcase and join hoards of people in an overcrowded airport before sitting for hours in a cramped seat on an airbus that circulates everyone else’s germs through its air-con system. I’m here!

I have the sun, the sea and the sand and all things foreign that used to entice me abroad for my holidays.

But is there perhaps one little cloud on the horizon? Living in the Algarve can make you a prime target for the flight-only holiday, and it doesn’t take long for friends and relatives to catch on to the fact that they have among them a ready-made holiday destination, an opportunity too good to miss. So when I talk about ‘happy holidays’, I refer to theirs, not yours!

When we first moved to the Algarve, home was our modest one-bedroom holiday apartment. There was no space for guests, so we didn’t have any.

But many of my friends lived in more sizeable houses and villas with plenty of accommodation and summer became a busy time for them.

One friend in particular used to go into a steep decline during July and August as family with young children descended for their annual jamboree. She would disappear from the scene as her hostess duties took over and Holiday Stress Syndrome (HSS) ruled her life.

Two months later, she would reappear, a shadow of her former self, with horrendous tales of children with dirty feet and soggy bathing costumes bouncing all over her pristine white sofas.

HSS is not a recognised illness like SAD, but it has similar symptoms such as depression, sleep deprivation, anxiety and mood swings.

And why?  Because your beautiful home and your peaceful life are invaded by groups of people you thought you knew and loved but have turned into a bunch of thoughtless, careless lazybones.

It wasn’t until I moved from my T1 into more spacious accommodation that I realised just what my friend was going through. First degree disruption.

Don’t get me wrong. I absolutely love having friends and family to stay. I’m flattered that they want to spend some of their holiday entitlement with me. And if it’s cheap, so much the better. But it’s no holiday. Not for me anyway.

It’s over three years since we moved to our ‘des-res’ in the foothills. Three summers of holiday visitors. Some family, some friends.  And they all keep coming back.

I try to introduce a simple house rule. “If it’s your holiday, it’s my holiday, so I don’t do the catering. Breakfast is d-i-y and we eat out every night.”

This usually goes down well as nobody wants to see their hostess slaving over a hot stove all the time. Or maybe they just don’t like my cooking.

There are, of course, one or two exceptions and one of my dearest friends still hasn’t learnt where the kettle is.

All well and good. But while you try and economise by eating chicken ‘n’ chips, your visitors bosh back shedloads of gambas, lagosta, cataplana and porco preto, quaff endless quantities of wine and sangria as if their lives depended on it, and wait for you to drive them home.

The joys of being a Red Coat begin to pale. I drink more water in July and August than the rest of the year put together. Not because I’m dehydrated, but because I’m the chauffeur. Boring!

My house is fairly minimalistic. There’s a good reason for this. I can’t stand clutter.

My dining table is bare so that I can lay it quickly and serve meals in an environment which is mess-free.

My kitchen is pristine. Clean work-tops invite the most discerning chef to prepare food in hygienic surroundings with every possible utensil at his fingertips.

This is obviously my downfall, because every surface in my house becomes a dumping ground. Newspapers, handbags, beach towels, iPods, sunglasses, reading glasses, P20, paperbacks, nail varnish, half empty water bottles, cameras, and the all-important SatNav (can’t leave it in the car, luv, it might get nicked).

The SatNav puzzles me. Do they think the pilot might lose his way between Manchester and Faro? And it seems that mobile phones can only be charged in the kitchen.

What’s wrong with the electric sockets in your bedroom?

I really can’t understand why every slurp of water requires a fresh glass. Or why a new bottle has to be opened before the old one is finished.

Or why it can’t be put back in the fridge for the next person to have a cool drink. This makes me sound crabby, doesn’t it?

While your friends and family are having a cheap holiday, you’re having an expensive one. Daily visits to the lixo are evidence of the dozens of bottles of wine, gin, beer and water that are consumed on a daily basis.

Why does everyone drink gin on holiday? And who’s paying for all this liquid refreshment? “Where are we eating tonight?” becomes the dreaded question when all you want is beans on toast for tea and a double dose of ‘Corrie’.

You drag yourself out to yet another restaurant and force litres of water down your throat while everyone else gets wrecked. No-one ever suggests getting a taxi to give the driver a break.

You rise at 6.30 every morning to empty the dishwasher, switch off the decking lights that have been burning all night, and tidy up the terrace after last night’s après-dinner drinking party in preparation for the first meal of the day.

Because, in spite of your house rule, the d-i-y breakfast means they only have to butter their own toast.

You hang out the laundry that your best friend forgot she’d put in the washing machine, and you trip over the putter that her husband conveniently left lying on the kitchen floor after demonstrating his new technique at one o’clock in the morning.

You load the table with cereals and fruit, yoghurts and juices, fresh rolls and croissants that you nipped out to the local shop in your dressing gown for in the hope that didn’t meet anyone you knew.

Tea, coffee and toast have to be replenished at regular intervals. With any luck you find time to have a shower and wash your hair before the first of your guests appears bleary-eyed and scatters bran flakes all over the floor.

It’s at this point you realise your ten-of-everything in the crockery and cutlery department isn’t enough, and within an hour the dishwasher’s on again.  But it’s their holiday, and you want them to have a good time and take home happy memories.

Your own happy memories come in the form of hefty bills in the weeks ahead. The first is the lavandaria as you stagger under the weight of load after load of bedding and towels.

And was it coincidence that the front door lock broke when they were here (€130 to replace), and the electric golf trolley we lent to save money no longer functions?

Then there’s the water bill, a hefty reminder of the five showers a day that everyone seems to need when they’re on holiday, not to mention leaving the tap running when they’re cleaning their teeth.

Droughts in the UK clearly haven’t made their impact yet. I’m being crabby again.

The medicine cupboard is the one that catches you out. I really don’t understand why travellers don’t carry their own little first aid kit.

It isn’t until months later when you need one of these yourself that you realise your cupboard has been raided. And it’s always on a Sunday or a feriado. It costs a fair old whack to restock this precious cache.

And finally the electricity bill, which makes you realise that you should have asked them not to leave the air-conditioning on 24/7 – especially when all the doors and windows are wide open and you’re out for the day.

No wonder hotels are so expensive. There’s a lot to be said for these flight-only holidays.

The bottom line is that what you spent on their holiday could have afforded you a nice little jolly of your own.

A City Break in Venice perhaps? Or a long weekend on a Health Farm being pampered and mollycoddled. Yes please!

In spite of all this, I enjoy these visits, even though the sense of relief when they’re over is enormous and the massive clear-up begins.

I’m not sure about Sir, though. “A bunch of flowers would have been nice,” he mutters as he helps me put the house back into some semblance of order.