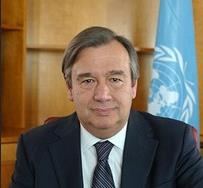 ANTÓNIO GUTERRES, United Nations (UN) High Commissioner for Refugees and former Prime Minister of Portugal, was elected Personality of the Year 2005 by the Associação de Imprensa Estrangeira em Portugal (AIEP), the foreign press association of Portugal. The award, which is given annually, aims to distinguish the Portuguese citizen who has promoted Portugal in the most positive way throughout the world.

Guterres received the award yesterday (March 30) during a gala dinner held at Estoril Casino. Being chosen to head up an international entity, whose mission is to support and protect refugees throughout the world, proved decisive in the choice of António Guterres for the final voting.

For AIEP members, the election of a Portuguese for the position of UN High Commissioner for Refugees enhances the prestige and international reputation of Portugal.

The prize was first awarded in 1990 to musician Carlos Paredes and, since then, a further 15 personalities from the worlds of politics, literature, entertainment and sport have been honoured. The list of famous names includes footballer Luís Figo, Fado star Mariza, author José Saramago and José Manuel Durão Barroso, President of the European Commission and former Prime Minister of Portugal.