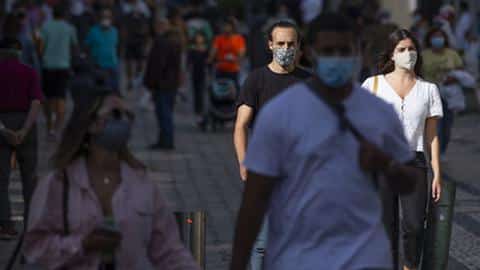 But numbers in hospitals continue to fall, including the number of patients in intensive care.

The message coming loud and clear is that the Lisbon/ Vale do Tejo area is the one where active infections are on the rise.

In the last 24-hours, 277 of the 559 new cases were flagged in and around the capital, while the area’s specific Rt number is the highest in Portugal at 1.10.

Conversely, areas like the Alentejo, Algarve, Madeira and Azores, are showing minimal signs of transmission.

The north comes behind Lisbon with 166, followed by the central region with 32.

But if one looks at Lisbon, incidence there has reached 132 cases per 100,000 – the majority of cases in younger age-groups, particularly those in their 20s.

This explains the lack of pressure on hospitals. Over the last 24-hours, hospital numbers dropped overall by only 1 to 207 patients being treated for Covid-19. Numbers in ICUs fell by 3 to just 55 in the whole country.

Coincidentally three people are reported to have died in the same period with Covid-19.

Friday’s bulletin also carries updated information on the number of cases per municipality. These are all ‘rounded up to populations of 100,000’ and much criticism has been made of the fact that population numbers are a decade out-of-date.

In other words, there have been, and continue to be municipalities, unfairly treated when it comes to calculations.

Odemira is a good example. The borough has been ‘pushed back’ in terms of deconfinement on the calculation of case numbers in citizens who are neither on the ‘electoral roll’ nor on census data. Had calculations brought ‘real population numbers’ into account, the municipality would not be registering such a ‘high’ caseload.

For the time being, two municipalities are described as ‘very high risk’ (over 600 cases per 100,000 inhabitants): Arganil and Ribeira Grande in the Azores.

This data does not appear to have been fully taken into account at yesterday’s Council of Minister’s meeting (click here) which put only 10 boroughs ‘on alert’, and did not mention the situations in Nordeste or Ribeira Grande.