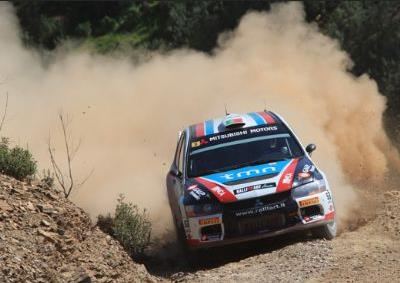 The Vodafone Rally of Portugal, the fourth all-terrain race on the 2009 World Rally Championship calendar, takes centre stage in the Algarve this weekend.

World champion Sebastien Loeb and former title holder Marcus Gronholm apart, local fans will be fascinated by the top-level renewal of the duel between Armindo Araujo and Bruno Magalhaes, national champions for the past six years.

Today’s opening ‘Superspecial’ stage at the Stadium of the Algarve, repeated on Sunday at the same venue prior to the closing ceremony and preceding tough cross-country stages throughout the region on Friday (today) and Saturday, featured match racing on the specially rebuilt football pitch preceded by stunt driving, acrobatic fly-by, and parachute displays by a

Portuguese Air Force team as well as a classical car race, paddock visits for fans and a demonstration by the Portugal A1 GP team.

The latter will be back in serious action at the Algarve Motor Park near Portimao next weekend for the region’s inaugural Vodafone A1 GP Algarve which sees Filipe Albuquerque bidding to enhance his chances for a season-ending podium finish.
1″>news