Portugal Resident
Home Original ‘Grease’ is the word at school 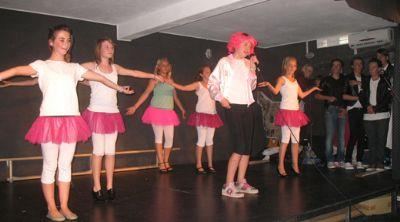 Vale Verde International School near Lagos put on performances of the hit musical show Grease on June 18 and 19, playing to packed audiences in the school theatre.

Although the cast was relatively young, aged 10 to 15, high standards of acting, singing and dancing were in evidence. The lead characters were performed by Leo Bourne (Danny) and India Harris (Sandy) taking on starring roles for the first time.

From the outset of the show into Summer Nights and finally with You’re the one that I love, the students acted with confidence. They were backed by the ‘Pink ladies’ and the ‘T-birds’, all of whom not only gave strong renditions of their various roles as solo singers and actors, but also produced dynamic music and dance set pieces such as Shakin at the High School Hop and  We go together.

An additional scene of original material was added in order to incorporate the school’s Primary children and thus the story ended as it began with the opening assembly of the next school year.

The musical backing consisted of a 20-strong chorus and a large keyboard/guitar group which led much weight to the ensemble items.

The back stage crew led by Harley Whitman and Ellie Drummey performed miracles with the manoeuvring and storage of a splendid pink ‘Cadillac’ built by Ben Freeman.

The show was directed by Suzanne Catron, Janet Churchill, Nadia Mack and Vanessa Rawlins, and Roger Foreman was the Musical Director. Refreshments were provided by the PA.

Proceeds from the second night of the performance will be donated to Lagos Bombeiros.