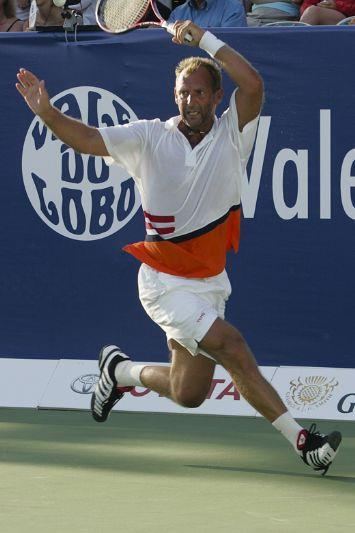 The 9th edition of the ATP Senior Tour Vale do Lobo Grand Champions tournament, which got under way earlier this week, should produce the eagerly anticipated final between top seeded group leaders Stefan Edberg and Marcelo Rios later on today (Friday).

Should all matches have gone according to form during the round-robin phase, only Britain’s former Davis Cup star Greg Rusedski, due to have taken on 2008 winner Rios at 10.30pm yesterday (Thursday) evening in the concluding group match, will have had a chance to upset the apple cart.

Those spectators expecting to have seen popular Swede Mats Wilander competing in the Algarve will have been disappointed however, as the injured former world No1 was replaced by Austria’s clay court specialist Thomas Muster.

Abroad, the Portuguese U-14 team showed that all is well within the national game by reaching the final of that age group’s World Championships held in the Czech Republic for the first time ever, only narrowly losing out to Spain’s youngsters at the death.

At the same time Faro-born Rui Machado climbed to his highest ATP ranking to date, 112, with clear-cut victories over highly regarded Argentine and German opponents Brian Dabul and Bjorn Phau before giving way to Austria’s Daniel Koellerer in San Marino.

The 25-year-old Portuguese champion is competing in Italy next in his attempt to make the main draw of the season’s last Grand Slam event, the US Open.