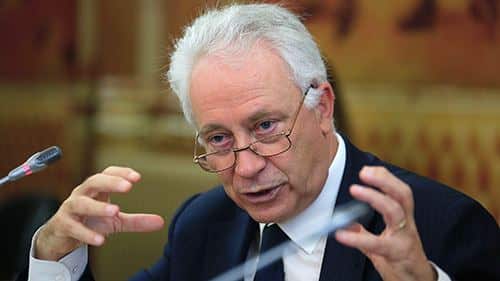 The target of resounding criticism over his handling of the nation’s multiple banking crises, Governor of the Bank of Portugal Carlos Costa has been talking of schizophrenia – but not in reference to himself. He was referring to new rules that have come into force in Europe this year, saying: “there is a schizophrenia between who decides and who pays” in banking liquidations “that is creating enormous difficulties for citizens”.

Two associations “of the damaged” that have formed to fight Costa’s ‘resolution’ of BES and subsequent ‘bail in’ of Novo Banco will attest to these ‘enormous difficulties’, as many claim to have lost the savings of a lifetime.

But Costa’s words at the Lisbon Banking Union seminar (“A New Frontier of EU Financial Regulation) were designed to get the EU to “rapidly beef up” the fund for winding up failed banks, as he explains “there is an asymmetry of powers and the need for answers. There are national sensitivities that need to be attended to”.

If these ‘sensitivities’ are ignored, the “banking union could become, instead of a solution, a problem”, he warned.

Referring directly to Portugal and the “need to relieve the (metaphorical) knapsack” that the country is carrying, Costa said “lack of confidence, ratings and inherent situations” were all factors in the problem.

Público explained that the governor is “of the opinion that a banking union exists, without a financial union” and that “it is (simply) one of the four steps needed towards financial union”.

The others involve “budgetary policies” (something the whole country is waiting for) and “the continuity and existence of valves of tolerance to face up to asymmetric and exogenous shocks”.

Anyone befuddled by Costa’s terminology will now need to consult a dictionary.

But in the meantime, one ray of light on the gloomy financial horizon is that Costa has at last agreed to meet commercial paper holders penalised in the BES good bank/bad bank carve up.

According to news reports, negotiations are due to take place before March, though the U-turn has not called a halt to the hundreds of lawsuits being filed, nor to the protests that AIEPC (the association of the indignant and duped commercial paper holders of BES) are planning.