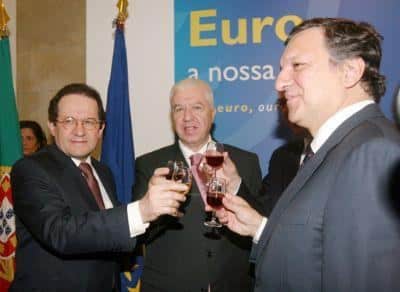 The Governor of the Bank of Portugal has admitted that the banking sector could undergo further consolidation over the next two years because of the economic crisis.

Vítor Constâncio said at a recent Economist conference in Lisbon that banks would “go back to basics” in adopting a more conservative and traditional approach to their business models in Portugal, while in order to reduce risk and increase capital, banks would have to consolidate which he welcomed as “desirable”.

He said it was “unsustainable and even unjustifiable” to imagine that the kind of growth in profits seen by the financial sector before the credit crunch and financial crisis would return and considered it “inevitable” that profits would fall back to more realistic rates.

Ever since the financial crisis broke in August last year, state-run Caixa Geral de Depósitos had been called to step in and save BPN, Banco Português de Negócios, while some banks had been forced to beef up their capital levels and redress losses by issuing new shares, such as Banco Espírito Santo and Millennium bcp.

There are increasing signs that both Finibanco and Banif will move forward with some kind of partnership or merger while there is also speculation that the Spanish bank BBVA is interested in Millennium bcp and the Catalan bank La Caixa, which holds  30 per cent in BPI, and is offering bi-lateral services for its BPI clients doing business in Spain and La Caixa clients in Portugal, could move to eventually take over the Portuguese bank, even though it is currently blocked from doing so by the government.

However, despite a number of small but ongoing scandals, such as the BPP issue, within the Portuguese banking sector, Portugal’s banks have largely escaped the direct fallout of the financial crisis affecting many international banks operating in the United States and Europe.

Although banks in Portugal rely on 50 per cent of their credit on the international financial markets which has meant credit has become dearer, banks are generally adapting to market contraction at home by turning their attention and investments to overseas markets in Angola, Brazil and North Africa.

Portugal’s eventual growth, albeit a fragile one because of the downturn, is more likely to be based on an increasingly positive export market, investment in emerging economies in Africa, like Angola and Mozambique, and other economies in Latin America as well as overall business investment.

According to Vítor Constâncio, these factors lead him to believe that Portugal will enjoy a “very moderate recovery” in 2010, leading to more sustained and consistent growth by 2011.
1″>news