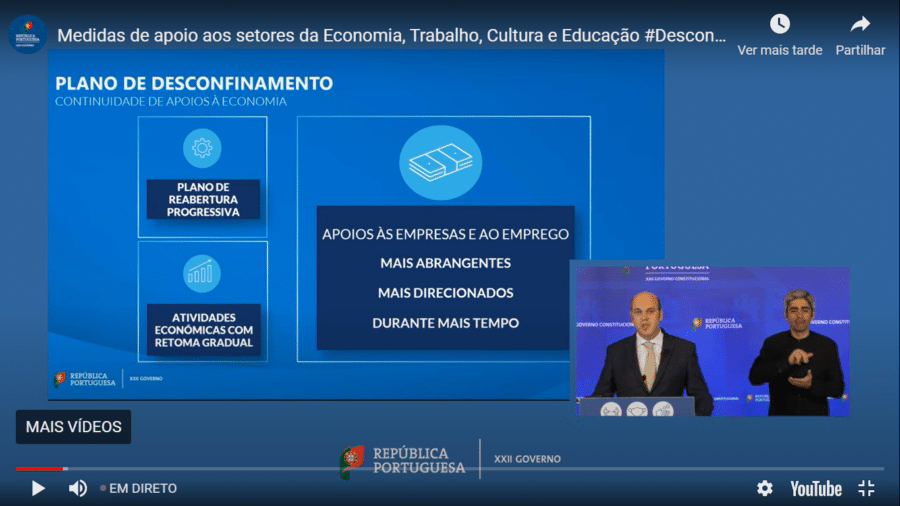 A press conference at Palácio de Ajuda this morning has heard that the Portuguese government is ‘giving away’ another €1.16 billion in direct non-refundable pandemic aid.

The money will be available to various sectors worst hit by the effects of lockdown. But will it be enough? This is the big question.

Opening the conference, economy minister Pedro Siza Vieira dressed the ‘great government giveaway’ up as “corresponding to more than €7 billion”. In other words, a lot of the support will eventually have to be paid back.

This was underlined by the fact that the next member of government to take the floor was the secretary of state for fiscal affairs António Mendonça Mendes talking about how the tax calendar will be ‘made more flexible’ and outlining a “series of very significant measures for businesses and independent workers”.

These boil down to delaying IVA payments (for companies that have suffered revenue falls over 25%) and ‘fiscal execution plans’ (which up till now have been suspended).

Then came the turn of labour, solidarity and social security minister Ana Mendes Godinho who confirmed that the simplified lay-off scheme for companies that haven’t been obliged to close but have been nonetheless ‘strongly affected’ will be extended to September, with reinforcements for micro-businesses, and the sectors of tourism and culture.

Culture minister Graça Fonseca was given the floor to outline the various measures for her sector, boiling down to:

Mr Siza Vieira announced that the Apoiar (support) programme launched in 2020 to compensate businesses with 20% of their fall in revenue would be extended, also to September. The programme will now ‘reopen’ to accept further sectors, like industrial bakeries and pyrotechnics companies (the latter of which have suffered massively due to the lack of events for the past year).

Tourism is to benefit from a €300 million ‘credit line’, destined for businesses with falls in income of more than 25% – and some of this money could eventually be converted into non-refundable support if the businesses involved maintain their members of staff.

For sport there is “€65 million” – €30 million of which will be in the form of grants. Education minister Tiago Brandão described the plan as “robust”. It involves a €30 million credit line for federations which can use contracts for the coming years as their guarantees – and €5 million for the ‘recovery of infrastructures’ – an amount which the minister said will be boosted by contributions from municipalities.

It was a whirlwind of a press conference involving one announcement after another – and during which Tiago Brandão added that Covid-tests in schools will begin on Tuesday with a universe of 50,000 teachers, non-teaching staff and pupils programmed for testing.Up till now, tests performed in schools have had a positivity rate of 0.1 – 0.2%, he said