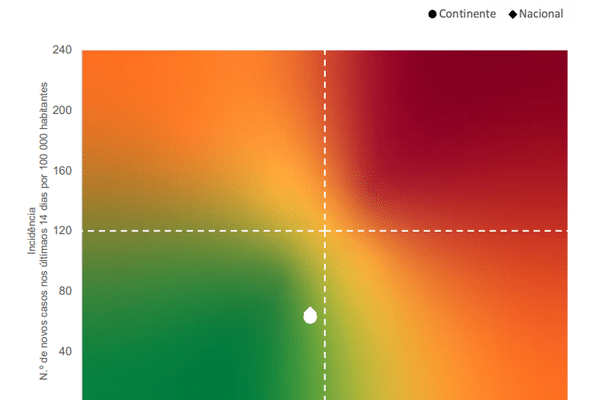 With the incidence rate up slightly to 62.9 cases per 100,000 (65.6 if one includes the archipelagos of Madeira and Azores), the Rt is getting perilously close to one of the ‘red lines’ in Portugal’s combat: a point where transmission can suddenly run away with itself.

That said, even the experts stressed some weeks ago that the chances of the country reaching an Rt of 1 were ‘highly likely’ during Portugal’s slow process of deconfinement.

On its own it won’t be enough to ‘halt’ the reopening of businesses, but transmission also has to fall (and the last 24-hours have seen it rise, albeit very slightly).

Otherwise, the situation in the hospitals remains relatively positive. There have been another 25 people leaving hospital in the last 24-hours. Indeed the country looks like it is approaching a point where there will be less than 500 in hospitals up and down the country. But ICUs today have two more people in them than they had at the last bulletin: a total nationally now of 131.

The last 24-hours have seen nine more deaths; 548 new cases, 743 recoveries and an active case count of 26,339 (which is another 204 less people than were positive yesterday).

The worst affected area remains Lisbon/ Vale do Tejo where 220 new infections were flagged in the last 24-hours and seven of the nine deaths (the other two deaths were one in the centre, one in the Algarve).

To date there have been 16,121 deaths in Portugual since the start of the pandemic: roughly 2% of the 822,862 people who have tested positive for the virus. In all so far 779, 655 people have been pronounced ‘recovered’ from Covid-19 infections.