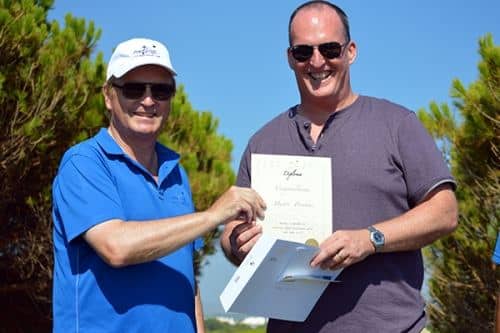 Algarve golfing group Golf for Greys has introduced a new competition to their events agenda, which sees a ‘Hidden Holes’ prize available at each game.

A competitor must either birdie or net birdie the three holes in question. The holes are known only to the organisers and will remain the same three holes at any course until it is won.

Cathal Tully won at Penina when the prize pot had reached €110.

The three hidden holes were changed and the Pot stood at €50 for the Golf for Greys’ next event which was due to be held at Vila Sol on July 26, after the Algarve Resident went to press.

If this event is not won, the pot will be carried forward to the following event, on August 1 in Silves, when it will be worth €60.

Previous Golf for Greys competitions this month were held on July 2 at Pinta, where Chris Dickens won the Gents event with 37 points, Manuel Cândido de Oliveira won second place with 26 points and third was Cathal Tully with 33 points. First for the Ladies was Paula Marques with 37 points.

The ladies prize went to Monika-Macht Hansmann with 34 points.

Nearest to the Pin Gents was won by Colin Shotton and unfortunately no lady hit the green for this game.

Best Guest was Roger Connoughton with 34 points, and the ‘Hidden Holes’ was not won.

On July 20, the event was held at Costa Esuri and the winner was Jaana Sauramo with 39 points, George Cook in second with 38 points and Bill Goodwin in third with 35 points. Nearest to the Pin went to Jaana Sauramo and Mike Stevenson.

August’s first event will be at the Silves Course and the 18 holes Stableford green fee will cost €35 and guests are welcome to attend.

Entries should be sent to lynn@golfforgreys.com.