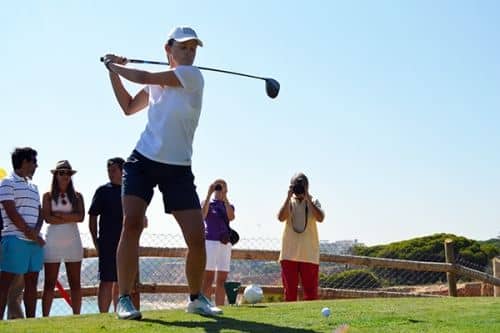 A major golf tourism event, taking place in the Algarve in November, is predicted to bring record breaking business from all over the world to the region.

The International Golf Travel Market 2012 (IGTM) is set to attract buyers and exhibitors from more than 50 countries including destinations across Europe, Asia and America, Ireland, Tunisia and Brasil.

Pebble Beach Resorts in the USA, an iconic Californian golf destination and five-times venue of the US Open Championship, is taking part for the first time in the Algarve based IGTM.

This year marks the fifteenth year of the IGTM, which will take place from November 12 to 15 at the congress centre of the Tivoli Marina Vilamoura, and will see buyers and exhibitors conduct business through pre-scheduled appointments and networking opportunities.

Peter Grimster, IGTM Exhibition Manager, said: “This year’s IGTM looks set to break all records. We are on course for the largest ever attendance, and the ratio of buyers to sellers is set ideally for destinations to optimise business with golf tour operators during the four days.”

He added: “I have no doubt that the business opportunities combined with the quality, accessibility and popularity of our host destination, the Algarve, Portugal, will make this the best IGTM yet.”

For four days, in addition to networking, the programme includes golf tournaments at Vale do Lobo, Pestana Vila Sol, Oceanico Victoria and Quinta do Lago.

Each tournament will take place on the same day, November 12, with 80 golfers playing on each course.

Christopher Stilwell, CEO for Oceânico Golf, told the Algarve Resident: “The IGTM is an important factor in the golfing industry as all major operators participate. I firmly believe the event will be successful and many will be attracted because of its popularity and also due to the Algarve’s reputation as a worldwide renowned golfing destination.”

Despite the IVA increase on golf from 6% to 23% this year, Christopher said: “As a company we made the decision to absorb a significant amount of the IVA in order to prevent the increase from being detrimental to our business, and that was the right decision to make as we are already way above on bookings for September and October, in comparison to last year. I certainly believe this year’s IGTM will bring record attendance.”

A spokesperson from the Oceânico Victoria course said: “We have the perfect infrastructure and weather here in the Algarve for this event, and I am confident that we will beat the record as the best event held so far.”

On the first day, a traditional inauguration party will take place at Agua Moments, Vilamoura, and on the evening of November 15 a closing gala dinner will be held at Puro Beach at the Tivoli Marina Vilamoura.

The Algarve Tourism Board, which previously hosted the IGTM in 1999, anticipates great interest in the event and that widespread business will be generated in the region, which has been an established golf travel destination for more than 30 years.

President of the Algarve Tourism Board, António Pina, said: “The Algarve is one of the top European golf destinations and one of the best in the world, and many of our 32 courses are recognised and awarded for their excellence. Approximately half of all Portugal’s golf courses are in the Algarve, with 15% of tourism revenue in the region derived from golf, so it is an important sector of our economy.”

He said that the choice of the Algarve to host the IGTM was of great significance to the region in order to create ideal conditions for a successful business event.

“We are obviously very proud to have been chosen as hosts,” he concluded.

Each year the IGTM brings together more than 600 golf tourism suppliers, 350 pre-qualified buyers and the international media.

Sean Hawker, Managing Director of Golf for Greys, an Algarve association that organises golf events for older golfers who live here or are on holiday, told the Algarve Resident: “Although we have noticed a decline in the golf industry here in the Algarve, I would really like to see the IGTM event receive maximum attendance, as predicted, despite the decrease in the market that has occurred over the past year here.”

Prior to the IGTM, another prestigious event, the World Travel Awards Europe 2012, known as the ‘Tourism Oscars’,  will be held at the five star resort Conrad Algarve in Quinta do Lago on October 6.