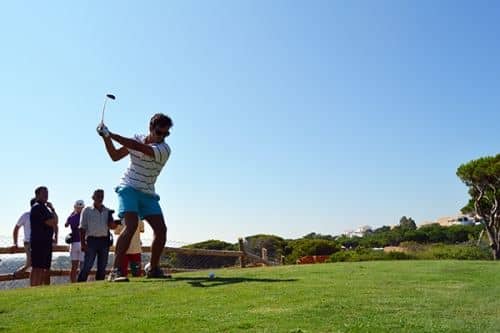 Padraig Harrington is the latest Major Champion to join the field for the Portugal Masters from October 11 to 14, and the Irishman is hoping that Oceânico Victoria Golf Club in Vilamoura can inspire him to a 15th European Tour title.

Harrington will be looking for another strong performance at Oceânico Victoria after finishing tied 16th in last year’s event and third behind Lee Westwood in 2009, when the six-time Ryder Cup star carded a superb second round 62.

Having shot under par in each of his eight competitive rounds at Oceânico Victoria, Harrington is relishing the chance to return to the venue next month.

“Portugal is always a great place to play golf and I’m really looking forward to going back to Vilamoura.

“We always have a very strong field for the Portugal Masters and it is a course where you can shoot a low score. The winning total tends to be around 20 under which puts you under pressure to make birdies, and there is also plenty of water around to punish you,” said Harrington.

The 41 year old Dubliner has recorded four top ten finishes on The European Tour in 2012, including tied eighth place in the Masters Tournament and a share of fourth position in the US Open Championship.

A hero’s welcome awaits European Tour champion Ricardo Santos when he leads the home challenge in the Portugal Masters next month at Oceânico Victoria Golf Course, the club where he learned to play the game.

Despite having grown up playing the 7,231 yards, par 72 course, which is situated five minutes from his home in Vilamoura, the 29 year-old has a relatively modest record in the €2.25million event.

His best performance came two years ago when, thanks chiefly to a third round of 65, he went into the final day in a tie for sixth place – only for a closing round of 75 to dash his hopes of securing the €500,000 first prize.

But with a European Tour title to his name thanks to his superb performance in Madeira, where he closed with a stunning round of 63 to take the title by four strokes, Santos is confident of staging a bold bid to succeed England’s Tom Lewis as champion.

He said: “I grew up next to Victoria Golf Course, so I obviously know the course very well. I once shot a 63 round there in a PGA of Portugal tournament, so it’d be nice to do that on the first day of the Portugal Masters.

“I haven’t played as well as I would’ve liked since winning in Madeira, but hopefully I can find some form for the Portugal Masters. I’m sure lots of friends and family will come along to watch me, so it should be a really good week. Unfortunately my daughter, Victoria, wasn’t with me in Madeira, but I’m sure she will come to the Portugal Masters. I always look forward to the tournament anyway, but after my win it should be extra special.”

Advance tickets are available now for the 2012 Portugal Masters, with substantial savings on the gate prices.

For more information or to buy tickets, please visit: www.europeantour.com/tickets.