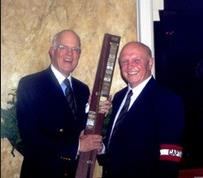 THE ROYAL British Club Golfing Society (RBCGS) completed its 2005 season with a competition for the President’s Baffy at the Golfe do Estoril.

The outgoing Captain, Edward Robbins, took the occasion to win the tournament with 37 Stableford points, before handing over the Captain’s armband to Richard Evans, who had won the event in 1983, the second time it was held.

Harley Barnard took second place with 33 points, followed by Derek McIvor with 30. John Brandon, also with 30, was relegated to fourth place after a countback. Margot Zimmerli and the incoming Captain took fifth and six. Ron Newstead won the “Top Ten” competition and the Newstead Cup was won by Carl Eggers. Eddie Leitão and Abby Itzig Heine won the accuracy prizes, nearest-to-the-pin on the 2nd and 4th holes. António Vieira won the Cow Bell and a golf lesson, an unusual occurrence for one of the Society’s steadier golfers. Axel Beselin won the Captain’s Prize for the best first nine.

Ron Goddard won two of the yearlong competitions – the Grand Prix for most winning points and the Eclectic for best “Gross score” on each hole at Estoril. He thus proved himself, once again, the Society’s premier golfer. John Brandon won the “Net score” Eclectic, proving himself the most skilled at applying his handicap. Evans will lead the RBCGS in 2006, with the first event scheduled for February 1.