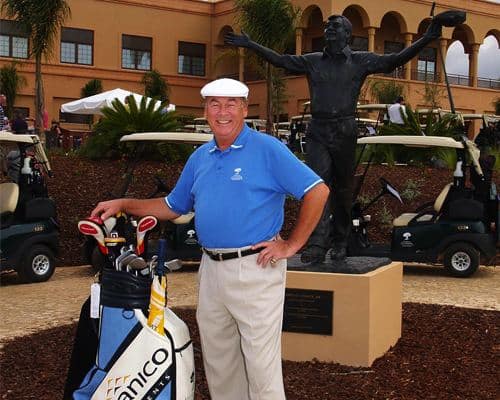 Irish golf legend Christy O’Connor Jnr – the man who designed the golf course that takes his name at Alcantarilha’s Amendoeira Resort – died yesterday (January 6) in his sleep while on holiday in Tenerife, Spain. He was 67.

Connor Jnr has been known as the ‘Ryder Cup hero’ after securing the trophy for Europe in 1989 with a legendary two-iron and birdie putt.

Oceânico Group has released a statement lamenting his loss as one of the resort’s leading ambassadors.

“A Ryder Cup legend, a great player and an amazing entrepreneur, Christy was a true gentleman and a great ambassador for our Amendoeira Golf Resort, where he poured his infectious passion into designing the Oceânico O’Connor Jnr course, which opened in 2008,” says the statement.

“From day one Christy embraced the project with that passion that was so unique to him. He quickly became part of the Oceânico family. He would spend so much time on site, personally overseeing the course developments and re-working every detail until he was 100% happy with the result.

“Every time he was in the Algarve and had the opportunity, he would come down and test his own masterpiece with friends and family. His charisma will live long in the memories of those who were fortunate enough to cross his path. He leaves the legacy of his vision for the game of golf, reflected in his designs, of which the Oceânico O’Connor Jnr course at the Amendoeira Golf Resort is an outstanding example.”

Christy leaves behind his wife Ann and two children, Ann and Nigel.