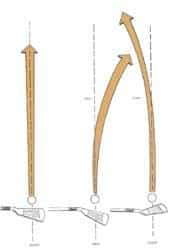 In our learning centres, my coaches and I are often faced with a player who wants to improve their game but who does not understand some basic laws that have a direct impact on the execution of their strokes. These are not the type of laws that tell us to drive on one side of the road or to pay taxes. The laws that I am referring to are laws that refer to physical forces which relate to the ball flight. Now, please don’t think that this is going to be a scientific paper, in fact, once you understand the following points, you will easily see why your ball flies through the air and why it sometimes does not go where you want it to!

These laws are non refutable, just as the law of gravity is consistent regardless of where in the world you are, and who is applying it. So, regardless if it is you or I who lets a coin fall from our hand, the result will be the same. Likewise, regardless of where you play, age, sex, size or the technique used, the following laws apply and affect the flight of the ball.

For many years we have known and applied these laws, so it is wise to understand the effect that each has on the ball.

This law refers to the position in which the leading edge of the clubface returns to meet the ball in relation to a line drawn perpendicular to the player’s body alignment. Any deviation from 90° will result in a ball that curves left or right of the swing line.

II. Path of the swing

This law refers to the direction on which the club is travelling in relation to the target at the point of impact. The path of the swing will have an effect on the initial direction of the ball.

This law refers to the angle on which the club travels towards the ground on the forward swing immediately prior to impact, and has a major effect on the spin, initial trajectory and distance potential of the shot.

Club head speed has a direct effect on distance and trajectory of each and every shot. An increase in velocity, if all other factors are equal, will result in a shot that flies further.

This law states that the point of contact on the clubface relative to the “sweet spot” has a direct effect on the flight of the ball. Failure to hit this point will result in a loss of direction, distance or both.

Every shot is a result of a mixture of the above and it is important to understand that most players do not perform the five laws perfectly. The top players in the world normally deviate from the laws but in a consistent fashion. For example, Jack Nicklaus, one of the best players in the world, routinely returned the clubface open to his body alignment, consistently producing a ball flight that moved to the right in the air.

The next article will explain how to apply these laws to the technique of swinging a club.