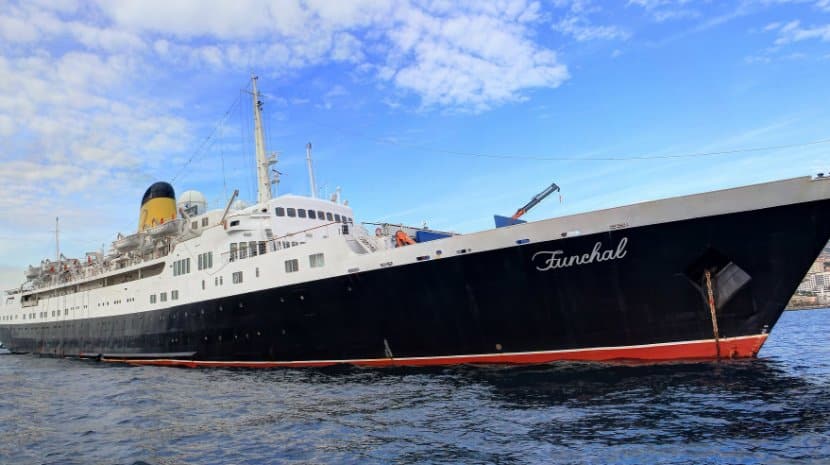 The iconic “Funchal” cruiseship went to the company whose slogan is “where hotels stop, we start” after a tense round of bidding in the boat’s sumptuous Ilha Verde (Green Island) ‘lounge’.

Competitors included a Luso-French group and a Turkish company that planned to break the boat up for scrap.

A reserve price of €2.3 million had been put on the sale but this was rapidly exceeded as the Luso-French consortium battled in vain.

But it wasn’t to be. Signature Living’s representative told reporters he ‘could have bid even higher’ – and as thwarted competitors pulled out, the company that started on the premise that hotels had become ‘bloated’, steamed through.

For now, it’s not know where the Funchal will be going – other than ‘somewhere in England’.

But it will almost certainly be transformed into a floating home-from-home.

The boat was one of four originally purchased with a €150 million bank loan (Montepio) by mercurial Portuguese businessman Rui Alegre, once married to Portugal’s ‘richest woman Paula Amorim’.

The deal flopped sensationally seeing all the boats moored in Lisbon since 2015
An investigation by SIC television news claimed recently that Montepio financed Alegre’s “ruinous naval dream” to the tune of €148.3 million, “for which half this amount had no guarantees”.

Montepio itself is beset by difficulties and controversy, with a spreadsheet of bad loans purportedly stretching into the hundreds of millions.

But the doldrums at least are over for the “Funchal” which will soon be making its way to the UK for a new life and total makeover.

In its heydey, the ship was laid out to take almost 600 passengers and a crew of 189. Its last known voyage was in 2014 when it travelled in style to Madeira following a €10 million refit.