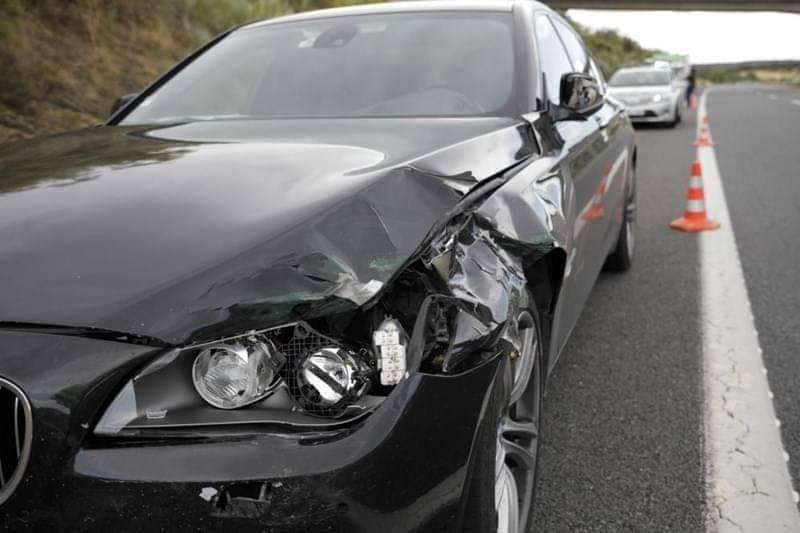 GNR police have been impeded from carrying out routine inspection work on the BMW that killed road worker Nuno Santos on the A6 on June 18.

This is just the latest ‘far-from-transparent-detail’ to emerge since the tragedy.

At the outset, the statements sent to the press from the Ministry for Interior Administration laid the onus of blame on Mr Santos himself.

This now appears to have been precipitous.

The devastated family that claims to have received the minimum in State assistance (click here) has now got the backing of a lawyer who insists that Mr Santos was wearing all the ‘reflective’ gear his job required and that the work ongoing on the road was properly signposted, with a support vehicle in attendance.

As journalists circled with questions, the head of State said: “Normally when the President of the Republic is present, ministers don’t talk. But, if you would like to…” (this was directed at Mr Cabrita) – to be met with the response that: “This is absolutely not the adequate moment…”

The key piece of information that everyone wants to try and understand in this drama is the speed the BMW was going when it hit the 43-year-old father and sole bread-winner of a previously perfectly happy family.

Calculations made by tabloid Correio da Manhã as a result of images taken of the car by CCTV cameras on the motorway, have suggested a speed of ‘in excess of 200 km/h’ – which would be roughly 80km/h over the legal limit.

One of the sure-fire ways of establishing speed would be to access the car’s ECU (engine control unit). But this was denied GNR diligences, purportedly “by a higher decision”, says the paper.

GNR investigators called to the scene do not even know where the vehicle was taken once it was removed on a GNR low-loader, says CM – adding in a side-box that ‘any garage can easily remove’ data from an ECU (meaning incriminating evidence could potentially be lost).

For now, the official GNR command response is that the investigation into the accident is underway “and for that reason it is not possible to answer questions”.

Other news sources have stressed that contrary to CM’s insinuations, all the necessary GNR diligencies are ongoing.

But as José Joaquim Barros – the lawyer representing the victim’s family – explains, the accident happened in a long straight stretch of road with excellent visibility. There was no reason for Mr Santos not to have been seen – unless the minister’s car was travelling so fast that the driver did not have time to react.

Mr Barros insists: “We cannot understand why the driver didn’t see the obstacle (meaning the victim) ahead with so much visibility and so much time in which he could react…there weren’t even marks to show the car had used the brakes…”

Mr Barros has added that in his opinion the ministry’s press statements shortly after the accident put a lot of people ‘in check’. It was a “jettisoning of responsibilities that is not correct”, he said.

Another ‘odd detail’ is that the GNR report is understood to refer to only three witnesses (meaning Mr Santos’ workmates). Neither Eduardo Cabrita, nor the other passengers inside the car, were identified as witnesses, says CM.

Reacting to all the details and speculation swirling through the media, Opposition leader Rui Rio has tweeted: “If this is true it is very serious. Proof, in practice, that the car was speeding. Proof also that the prime minister is the real responsible politician for insisting in maintaining – against everything and everyone – the Minister of Interior Administration in office”.