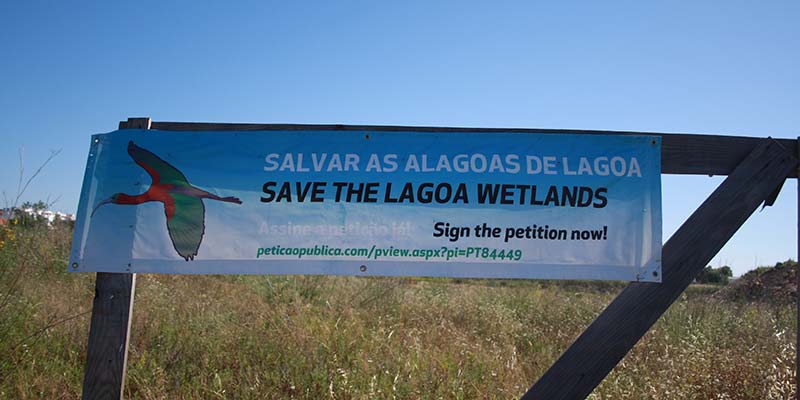 The heroic civic fight to save Alagoas Brancas, the tiny freshwater lagoon that gave Lagoa its name, has upped the ante this week, succeeding in nationwide exposure on RTP (State) television and enlisting ‘big gun support’ from eco-warrior ‘experts’.

If Lagoa council thought its explanation that it is bound to comply with a plan approved over ten years ago was going to be enough, it may well have to think again.

Today (Friday), the Salvar a lagoa de Lagoa Facebook page has come out with a blistering attack that essentially leaves the council’s arguments in tatters.

What is needed in this situation, says the group, is “backbone”.

If the council had this backbone it could suspend the ‘obsolete’ town plan to which it claims to be tied, in the same way that neighbouring Silves has done – to allow for the expansion of Zoomarine – or as Loulé did recently to stop further coastal construction (click here).

Indeed, Loulé’s decision is the one to watch, says the group, as it invoked the biophysical sensibility of the area in question. Arguments were underpinned by climate change, and public interest. In short, Loulé based its reasoning for halting further construction on many of the points being fought in Lagoa.

“There are key issues at play here”, said the group’s legal advisor Rui Amores who has recently worked with PALP to fight off oil exploration in the Algarve, and with conservationists in Portimão who have successfully seen-off a mega-tourist project for ‘the last window on the sea’ (click here).

Explains Amores there are “urbanistic environmental and juridical” justifications to save Alagoas Brancas from being concreted over to make way for warehouses and supermarket support infrastructures.

On RTP last night, Lagoa’s deputy mayor Luís Encarnação told reporters that the council did not have “one document that obstructs or allows it to make a decision to suspend the town’s urbanisation plan that was approved in 2008”.

As campaigners explain, there is in fact no need for a document – as both Silves and Loulé town councils have shown.

But if the council wants a document there is one it can easily use: resolution 105/2018 made in parliament last year which recommended to the government “the development of actions leading to the defence and preservation of the Alagoas Brancas wetland area in Lagoa”.

As RTP’s report yesterday stressed, that resolution has not seen any results since 2018.

And since then every intervention made by concerned residents and bird lovers who visit the lagoon every year has fallen on deaf ears.

But now perhaps, the tables have turned.

RTP’s report has highlighted the clear risk to people and property if wetland areas are concreted over.

Urban architect Lucinda Caetano explains there is only one aqueduct that would drain water away from the site if it started building up, and that was constructed in 1948, and runs under the EN125.

Thus, if there was a ‘catastrophe’ (heavy rains of the type that saw large sections of Albufeira flooded only a few years ago) “there would be problems for people and their homes”.

The save Alagoas Brancas’ team is planning its next course of action.

One thing is certain: no one is giving up.

The last Facebook page entry concluded with: “Shame on you, Mr Deputy Mayor. Make yourself a public decision maker and make the decisions you have to make …” decisions that protect people and natural heritage, “decisions that take up-to-date information on climate change into account”; decisions that accept data on the “absolute necessity to protect wetland areas”.

The Resident has called Lagoa council to see if the renewed force behind citizens’ fight has opened mentalities a little in the town hall.

A spokesman told us: “There really is no one here who could talk about the opening of mentalities.

“Perhaps, the best person to speak to would be the deputy mayor, but he is not here now and he won’t be until Monday”.

Campaigners have questioned the apparent lack of interest of mayor Francisco Martins. As one has written in a letter published online referring to a recent council meeting: “While campaigners argued passionately against the destruction of the wetland council president, Francisco Martins, shared a joke with his colleagues on the top table” and later “calmly walked by” protesting, ‘ignoring them completely’.