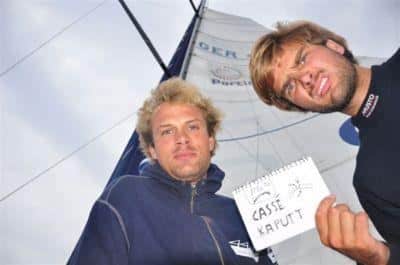 Despite the handicap of a damaged main mast, the German crewed Beluga Racer managed to pass the final scoring gate of the Portimão Global Ocean Race in the north Atlantic in second place to secure an unassailable points lead and thus overall victory in the inaugural edition of the circumnavigation challenge.

Joint skippers Boris Herrmann and Felix Oehme are currently trailing the Chilean Desafio Cabo de Hornos by almost 100 miles during the fifth and final leg with British double-handed competitors Team Mowgli well beaten off in third, but will be crowned the winners upon their return to Portimão later this month.