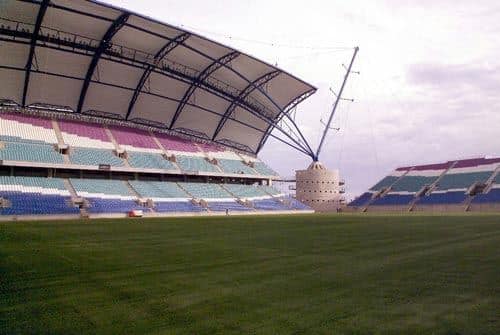 The Algarve Tourism Board (RTA) was overjoyed to hear that Gibraltar’s national football team would be facing Germany, Ireland, Scotland, Poland and Georgia in the Euro 2016 qualification stage.
Gibraltar will be playing its home qualifiers for the Euro 2016 at the Estádio do Algarve, and tourist bosses reckon the matches will bring more tourists flocking.
“The region’s visibility will be strengthened by these matches and the RTA applauds Gibraltar’s Football Federation for their decision to play in the Algarve,” said the board’s president Desidério Silva.
The head of RTA went on to say that “Gibraltar chose the Algarve for its capability to receive major outdoor sporting events all year long”.
Loulé mayor Vítor Silva also expressed his excitement, saying “the matches will be an opportunity to attract more tourists to Loulé and the Algarve”.
Germany is currently the second largest market in terms of tourists for the Algarve and Ireland is the fourth.
And of course, Scotland is part of the United Kingdom, which is the region’s largest tourist ‘supplier’.
All in all, Gibraltar will be playing five matches in Estádio do Algarve.
They will first take on Poland on September 7, and on October 14 they will face Georgia.
In 2015, the most eagerly awaited games will take place. Gibraltar will play all-mighty Germany on June 13, and then battle it out against Ireland and Scotland on September 4 and October 11, respectively.
They will take part in a qualifying stage for an international competition for the first time after being accepted as a UEFA member in May 2013.