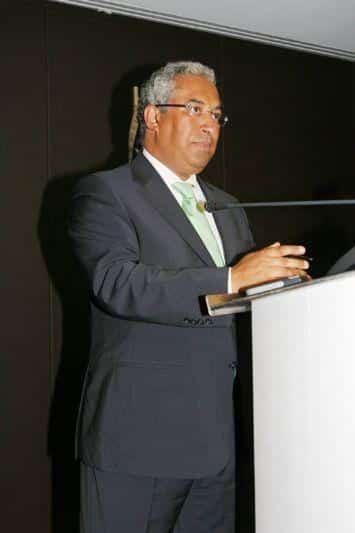 Lisbon Mayor António Costa says he and his team have been working hard to “put the house’s financial accounts in order”.

Speaking at an American Club lunch, he said that of a total of 350 million euros outstanding to service suppliers, 150 million euros had already been cleared. António Costa also said that time limits to pay supplier invoices had been reduced from 190 days to a month.

The Câmara president laid out what he called “clear and transparent rules” for municipal activities and talked about “ordered and regulated urban management”.

“We have been completing projects that were abandoned because previously we hadn’t been able to pay the contractors,” he said.

Municipal swimming pools that had been closed were now being revamped and reopened, and run through private-public partnerships.

The Câmara had also succeeded in attracting another world-class museum, the Museum of Fashion and Design (MUDE), into the heart of Lisbon’s historic downtown Baixa in a former bank headquarters that had been shut for eight years (see Algarve Resident May 29 edition).

Thousands of planning permission licences and other processes that had been paralysed for years were now being prioritised and moved forward while the city’s gardens and public spaces, which had been barely maintained in many cases, were now being done up.

Some six million euros was being spent on resurfacing 500 pavements and road work projects while 240 streets and roads had already been repaved or resurfaced.

The Câmara, he said, was continuing an ambitious 120 million euro urban regeneration project involving the restoration and recuperation of many of the city’s buildings, creating 5,000 jobs and involving 345 contractors.

The sewerage system in and around the Terreiro do Paço Square, serving some 6,000 inhabitants from between Alfama and Cais do Sodré, was finally being revamped and redirected to Alcântara for treatment after plans had been put on ice for 11 years.

António Costa admitted that air and noise pollution in Lisbon’s Baixa and Avenida da Liberdade were “among the worst in Europe” but plans were afoot to reduce the number of cars circulating in the Baixa to create “better air and more space” for tourists, shop keepers and residents.