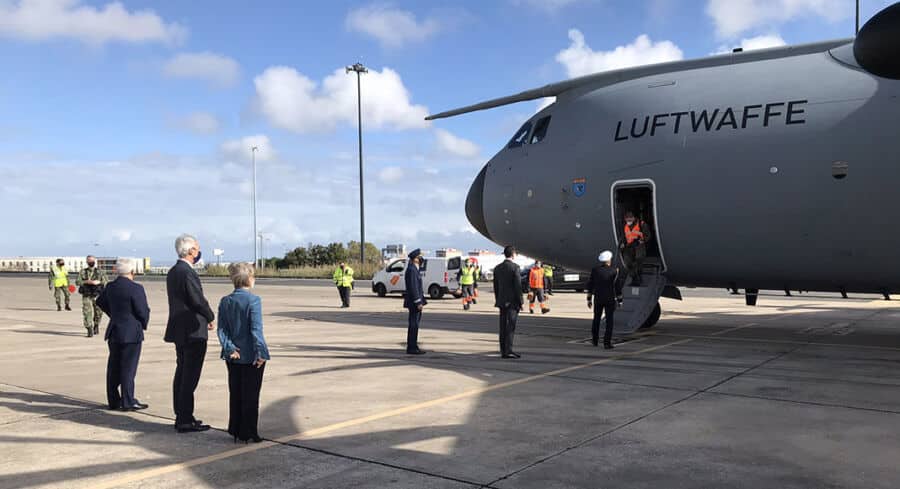 The teams of German ‘Covid specialists’ who arrived in Portugal in February when health services were ‘on their knees’ have finally ‘gone home’ as numbers in hospitals have fallen dramatically. PM António Costa tweeted his thanks as the military professionals were given a heroes’ send-off from Lisbon’s Figo Maduro air base.

He wrote: “I am grateful to the German military medical team that for six weeks worked side by side with our health professionals in the fight against #COVID19. It was a magnificent gesture of European solidarity. Vielen Dank” (German for ‘thank you very much’).

Meantime, defence minister João Gomes Cravinho, under secretary of state for health António Lacerda Sales and Martin Ney, the German ambassador to Portugal, were on the tarmac, shaking hands and showing Portugal’s gratitude.

Talking to Lusa on Thursday, the team’s spokesperson Andreas Vossen said he felt the mission had gone very well.

This was the second team to have arrived (the first stayed three weeks from February 3) (click here).

The Germans worked out of Lisbon’s private (Chinese owned) Hospital da Luz, exclusively in charge of the intensive care unit that looked after 16 SNS patients – the majority of them “for many weeks”.

No data was given on whether any patients did not recover from their period in specialist care.