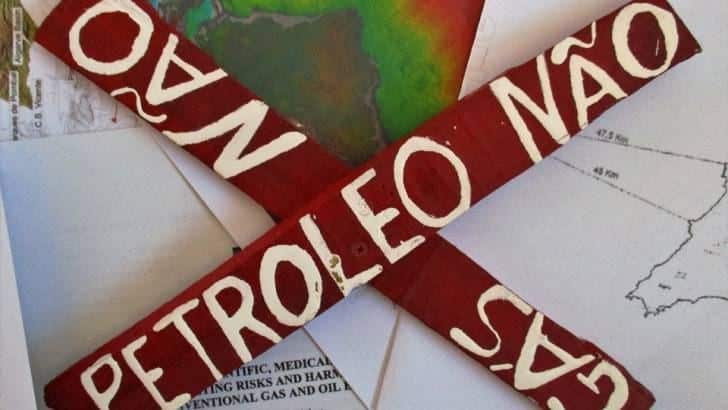 Anti-oil platforms are warning of a new hurdle in the push for a study into the environmental impact of fossil fuel exploration off the coast of Aljezur.

With a government that has already shown it is ready to do away completely with the need for an environmental impact study (EIA), they say it is vital that “as many thousands as possible” understand the situation.

Posted on the government’s Participe portal yesterday is what immediately looks like access to public consultation for the EIA.

It is in fact nothing of the kind: “It is just a first step”, explains campaigning group StopPetróleoViladoBispo.

It is only in the body of a letter sent out yesterday by environmental agency APA that campaigners appreciated the words “prior consultation”.

In other words, the public consultation is to see whether there are enough people ‘concerned’ with the idea of gas and oil drilling off the Algarve/ Alentejo coast to go to the trouble of commissioning an environmental impact study.

Considering the hue and cry sent up across the Algarve over the last two years, the declaration of war threatened by mayors last week and the 42,000-strong petition delivered to parliament last year, the message that local populations are concerned about the environmental implications of the plan are already a matter of public record.

But through some procedural quirk, it is now necessary for enough people to register their feelings online before an EIA will be considered (and that’s before one accepts that if the authorities accept it is needed, the document will be drawn up by the very company that means to start drilling for oil and/ or gas in May).

“We have to persuade thousands of people – some of which will be elderly and may not have direct internet access – to register online and make their feelings heard!

“If they don’t, there simply won’t be any EIA, and drilling will go ahead within the next three months.

“We’re at the point where we have to do everything to slow this bid down”, she said. “We have to make it as difficult as possible for the companies to start drilling”.

StopPetróleoViladoBispo was one of eight groups that lobbied APA in January with a full report on all the reasons why an EIA is necessary, but Ana Carla told us “so far we have had no response.

“We only received APA’s note about the pre-consultation via another group – otherwise we might have missed it”.

With ENI/ Galp’s projected drilling date drawing ever-closer (click here), campaigners’ message to people now is “please register” on Participa.pt using the link below to the pre-consultation process which opens on Monday (March 5) and runs for 30 days until April 16.