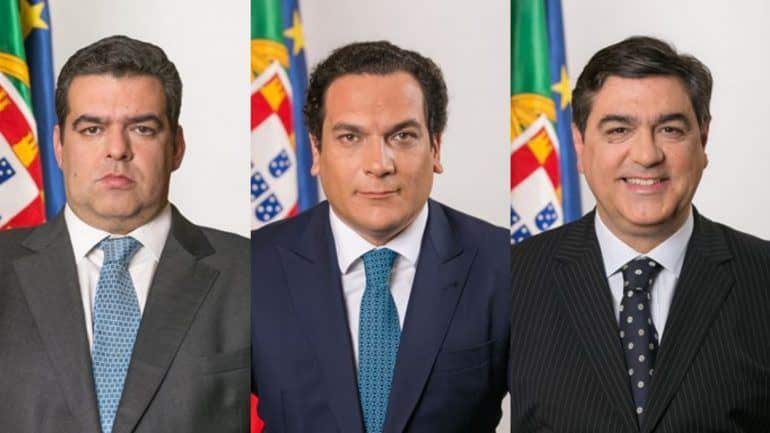 Three Secretaries of State handed in their resignations on Sunday – 13 months since their names were linked to the convoluted football freebie controversy, now dubbed Galpgate.

On Monday, the “mug shots” of Fernando Rocha Andrade (fiscal affairs), João Vasconcelos (industry) and Jorge Costa Oliveira (internationalisation) were been splashed across the nation’s media.

The official story was simple: the three requested that prime minister António Costa accept their withdrawals from public office so that they could be made ‘arguidos’ (official suspects) in the inquiry launched by the Attorney General’s office last year, without prejudicing the government.

As newspapers explained at length last summer, the inquiry centres on whether a number of political figures were committing the crime of receiving undue advantage when they enjoyed freebie trips on private jets chartered by fuel company Galp to attend Euro 2016 football matches in France.

At the time, neither the secretaries of State nor the government saw anything wrong with what they termed “a completely normal” perk of public office (click here) despite a veritable outpouring of criticism from Opposition parties, which then fell quiet when it was revealed that even their MPs had been at the trough (click here).

In a statement released in perfect synchronicity with news of the ‘resignations’, prime minister António Costa said he had decided to accept them “even though the Public Ministry has not made any accusation against” the three men (see update below).

Costa took the occasion to thank the three outgoing politicians for their “relevant” and “dedicated collaboration” in the function of his government – and the news travelled like the proverbial bushfire.

According to Diário de Notícias more resignations would follow “in the next few days”.

And according to Expresso “among the arguidos was the prime minister’s economic assessor Vítor Escária” who within hours “followed the steps of the discharged secretaries of state”.

What was not being widely reported in news onslaught was “the background story”: the fact that Galp owes hundreds of millions to Portugal in unpaid taxes.

And that is before one considered the issue of the “extraordinary contribution tax” which, according to CM already exceeded 130 million euros.

While CM maintained that Galp’s tax issues date back to 2001 “when it was the subject of various inspections to exercises that went back to 1997”, Público insisted the oil giant’s black marks only went back a couple of years.

Nonetheless, it is clear the company owes the country a great deal of money – and for reasons unclear almost none of the official versions of this story in mainstream press today refer to this.

So, the question remains could the revelations be a ‘good news story about transparency’ at a moment when there are a lot of ‘bad news’ questions hanging over the government’s handling of the worst forest fires in living memory (Pedrógão Grande) and the embarrassing explosives heist from a military base in Santarém?

It has to be stressed that all three secretaries of state eventually paid Galp for the cost of their jollies, and following the scandal have been bound, claimed Observador last year, “under the terms of Portugal’s Code of Administrative Proceedings to have nothing to do with any future decisions involving Galp”.

As Observador explained at the time: “this could prejudice (the men’s) performance in future”. Aside from Andrade dealing with the outstanding “fiscal issues”, Vasconcelos represented industry “of which Galp is Portugal’s largest” and Costa Oliveira’s ‘internationalisation’ would come up against the oil company due to Galp’s “strong roots overseas”.

In other words these dismissals/ resignations, coming well over a year since the scandal came out – after the government insisted it was “completely normal” to accept these kind of “gifts” – could be quite expedient.