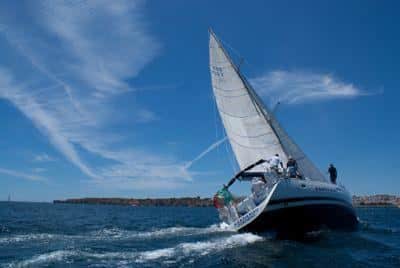 Between July 3 and 5, some 180 people took part in the sailing event on the waters surrounding the marina to celebrate the occasion, which also coincided with the 10th anniversary of organizers Bluewater Algarve.

Each day saw two races in Lagos bay and along the coastline, with 24 boats of different sizes competing.

On the final day, they competed in a longer race, which took competitors from Lagos to Burgau.

“We sailed from Lagos to Burgau and the wind really picked up. When we got to Burgau it was up to 32 knots but as soon as we turned to go back to Lagos, it fortunately settled,” said Paul Mallet, owner of Bluewater Algarve.

The Algarve Resident held a competition for one lucky person to become part of the sailing extravaganza and join in with a race.

The winner, Desmond Martin, set sail on a 52ft boat from Albufeira and had the opportunity to have first-hand experience of being part of a crew.

After a hard day’s sailing, there were well-earned celebratory drinks each evening.

On the Friday and Saturday night drinks were kindly supplied by South Bar in Lagos marina.  The finale on the Sunday evening featured a fancy dress party at Duna Beach club.

“It was a fantastic night and a perfect way to end such a wonderful week of sailing. Everyone looked fantastic dressed up as pharaohs and goddesses,” said Paul Mallet. “The weekend went amazingly well. It was a real celebration.”