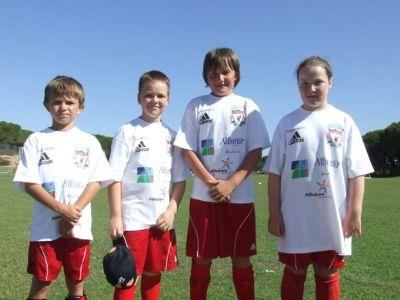 Around 130 children between the ages of five and 16 took part in the three-day Liverpool soccer school held at the Alfamar Beach and Sports Resort near Albufeira, between July 8 and 10.

Liverpool FC soccer school coordinator Adam Flynn told the Algarve Resident: “Our main aim at the school is to make sure that children have fun and if they can learn or improve on any skills while they are with us, then that’s a bonus.”

He added that the soccer school had children of all abilities, both boys and girls from both English speaking and Portuguese families.

“It’s always a real challenge to see how much can be taught to each child. Some learn more than others, but taking part is really what counts,” said Adam.

During a typical day at the camp, children learn skills such as heading, shooting, passing and ball handling, within a fun and safe environment.

According to Adam, this gives every child a chance to get a good feel for football, as well as team building skills as children were split into a total of nine groups throughout the course.

“The teams all play mini matches at the end of each day and, on the last day, we have a mini world cup tournament as well as a penalty scoring competition,” he added.

Eight-year-old Callum Murray from Lancashire in the UK told the Algarve Resident that he asked his parents especially to join the soccer school while on holiday in the Algarve.

“I support Manchester United but I love football,” he said. “The best bit for me was playing the mini matches at the end of each day.”

Algarve resident Alfie Price, 10, a Wolverhampton Wanderers supporter, said that he wanted to join the soccer school to improve his skills.

“I loved the whole three days and would definitely come again. I made lots of friends too,” he said.

Meanwhile, one of the girls at the school, nine-year-old Sarah Sheridan, who came on holiday with her family from Mulligar in Ireland, told the Algarve Resident that she loves football and her skills are better than those of some of the boys.

“It’s a nice sport and I’m good at it,” she said. “Playing the games was my favourite part and the coaches were all really nice.”

Ten-year-old Connor Thompson, son of legendary Liverpool footballer Peter Thompson, who made more than 400 appearances for the team in the late 60s and early 70s, was also at the soccer school and said that he liked the mini games best. He supports Blackburn Rovers football club.

At the end of the final day, all of the participants at the soccer school attended a prize giving ceremony at the resort, where certificates were given out and medals awarded to the team members who won competitions as well as the child who had the best attitude throughout the three days.