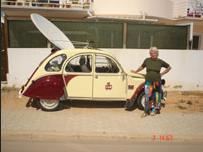 WE RECENTLY joined the satellite club and can now surf the ‘free to air’ channels. It isn’t our first foray into the system – when we lived in Ferragudo we were delighted when Portimão council decided to install a dish that was big enough to provide all its citizens with the benefit of receiving lots of free channels. It fought a long hard battle to keep this little perk, but lost to the providers, who were more than a little put out at not receiving any financial benefits for being the actual suppliers of the city hall’s generosity.

We returned to the four channels provided by the Portuguese system, with me chastising my husband for being ungrateful to a country that did, in fact, broadcast many films and TV series in the English language. I suggested that if he wanted to understand more about what was happening, he should perhaps take another course in Portuguese.

Well, I can remember the days when we had only one channel for about three hours in the evening and had to pay for a licence. A very excited salesman in an electrical shop in Portimão, had sold me a set in 1968, not an everyday occurrence, because most people watched TV in the local café. He had made the sale on the basis that this modern piece of technology had been prepared to receive a second channel, which was now being shown in Lisbon. We awaited the arrival of this new channel with great anticipation – sadly it was a long time in coming, I think a revolution and two house-moves came first.

Our recent foray into the satellite world was well in keeping with my ecological minded other half, who is a great believer in recycling. One of my sons was updating his digital equipment in England and we inherited his old receiver. Next came the search for a large dish, many of which usually repose in large numbers in rubbish tips on the more affluent estates when new systems are installed.

As luck would have it, the areas he covered were all out of the desired item, although he returned with a variety of other things, which he will no doubt find a use for some day. A chance conversation in our local uncovered the knowledge that one was available for free, provided it could be detached from its current location.

The dish in question was firmly anchored to the roof of the bar we were drinking in. Living in town and having access to underground cable television, the owners had opted for the service and the dish became obsolete. Getting on to the roof and removing the apparatus provided no problems for an agile and determined man, but transporting it was another matter. However, a solution for the transferral of our new acquisition was never really in question.

I have long been a proud owner of a Citroën 2 CV Dolly and together we have been resolving transportation problems for many years. In no time at all, the roof was rolled back, the support stem of the dish was thrust downward onto the back seat, while the dish itself lay gently on the outer rim. Some strong cord and we were ready.

Our brief journey from Portimão to Lagoa was uneventful. I had fully prepared myself to inform any queries from the gentlemen patrolling the EN125 that this was the latest in satellite navigation systems for 2CV’s but, the occasion never arose, and we arrived undisturbed at our destination. An expert was called in to assist with the final leg of the installation and we happily settled down to watch.

We are unimpressed with much of what we see. The news channels certainly keep us up-to-date with all the grim and gruesome details of the planet on which we live, but we have tired of hearing lurid details about the personal lives of all and sundry. We gave up on the reality shows after the first few minutes of watching one of them, and have come to an uneasy truce with the language used in many programmes.

With so many experts giving advice on how to bring up children, we shouldn’t have to be watching documentaries showing the downward spiral of so many young people and the lack of family values that were once so very important. My first husband was a composer, so why are so many of today’s commercial jingles using well-known melodies from the past with awful lyrics to present their products – aren’t there any budding melody makers out there practising their skills until stardom comes their way?

On the upside, the BBC is still making quality period pieces and Jeremy Paxman and the Dimbleby boys run some probing questions by some often very interesting people. Science, nature and history are all well covered and I love having BBC radio stations so I can ‘Wake Up To Wogan’ every morning.

The answer to last month’s question was of course Prisunic, but they’ve already changed it again and now Modelo has become the brand new Continente.