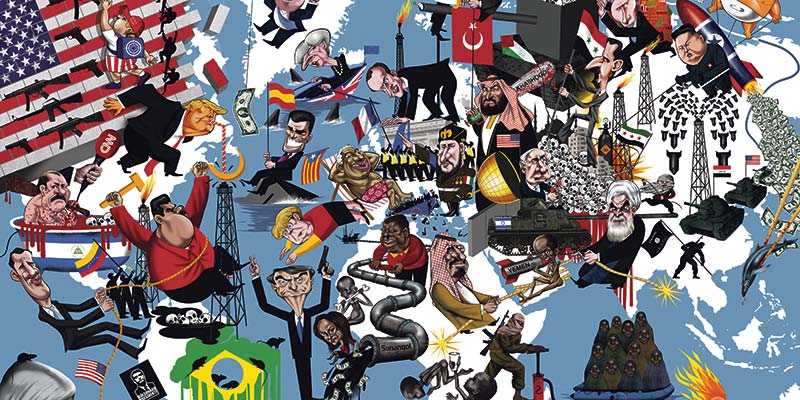 An exhibition of cartoons about freedom of press will be presented to the public today (March 22) at the lobby of Faro’s Teatro das Figuras at 7pm.

The cartoons were drawn by members of Cartooning for Peace, an organisation that “raises awareness about important issues through humour and press cartoons”.

The works were displayed at Paris’ town hall in January 2015 following the Charlie Hebdo shooting which claimed the lives of 12 people who worked for the satirical weekly newspaper.

This is just one of the initiatives that are being held as part of the 5th DeVIR festival.

José Laginha, the festival’s artistic director, told Barlavento newspaper that Cartooning for Peace is an association that “promotes satirical drawings, cartoons and illustrations as a vehicle for promoting peace”.

He says it “brings together artists from many countries” and is a “sort of syndicate of pacifists of our societies which are regularly victims of attacks all over the world”.

Following the exhibition’s inauguration on Saturday, there will also be a colloquium at the auditorium of Casa Memória Duarte Pacheco in Loulé on Saturday (March 23) between 3pm and 6pm.

It will be attended by several high-profile cartoonists such as Portugal’s very own Vasco Gargalo, Israel’s Michel Kichka and Charlie Hebdo’s head of human resources Marika Brett, who will talk about life before and after the attack at the satirical newspaper’s offices in Paris.

The exhibition at Teatro das Figuras can be visited from Tuesday to Saturday between 1pm and 7.30pm until May 31.

The DeVIR festival is part of the ‘365 Algarve’ programme and is backed by the councils of Loulé, Faro and Lagos.