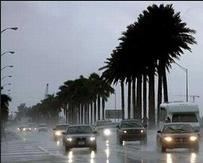 ASK ANYONE booking their summer holiday what they’re looking forward to most, and you’re bound to hear, “a spot of good weather”. However, with global warming gradually altering our climate, even the most traditional summer destinations can experience unpredictable weather conditions .…

Freak weather caused widespread damage to the harbour in Menorca’s coastal town of Ciutadella. A wave, with a height of around four metres, sunk around 100 boats and damaged several shops and restaurants in the port. Cars were also swept away, and residents spent hours helping emergency workers work through the night, to recover boats and vehicles and to pull them out of the water.

Local officials say the phenomenon is very similar to seismic tsunamis, hence they are referred to as “meteotsunamis”.

Blistering temperatures and strong winds have placed the Costa’s emergency services on high alert for wild- fires. The government has placed tanker planes and helicopters on standby to douse the area with tons of water if it goes up in flames.

Meanwhile, to add to Spain’s woes, the extreme heat has attracted the fearsome tiger mosquito to mainland resorts. Usually only found in parts of Asia, the tiger bug attacks during the day and can even bite through clothing. Experts are reassuring the public that, although its venom can be painful, it does not transmit any dangerous viruses. In addition to its new home on the mainland, it’s also feared the insect could find its way to the Spanish islands of Majorca, Menorca and Ibiza this summer. The bug can be distinguished by its black and white striped legs and body.

Extreme weather is also causing havoc in the US. Record-breaking storms and floods have killed at least 12 people on the northern east coast of America. Torrential rain also sparked an emergency evacuation for thousands of people in New York, New Jersey and Maryland.

In New York State, rising water from the East Canada Creek washed away a restaurant in Dolgeville, and also ruptured a gas line. Despite the extreme weather moving out of the area, many streams continued to rise, as water cascaded down from the higher ground.

Meanwhile, Tropical Storm Alberto, which developed in the Gulf of Mexico, was the first named storm of the 2006 Atlantic hurricane season. Alberto was never strong enough to turn into a hurricane, and was actually welcomed by firefighters, who have been battling wildfires for several weeks in parts of Florida.

The system that produced Alberto, started nine days after the official start of the hurricane season, and scientists predict the 2006 season could produce up to 16 named storms, six of them major hurricanes. Last year’s hurricane season was the most destructive on record, and was also the busiest since records began.

It seems that predicting what the weather will be like when you visit your next holiday destination is getting harder and harder, so we thought you might like to know which are the hottest, coldest, wettest and driest places on earth. You have been warned!